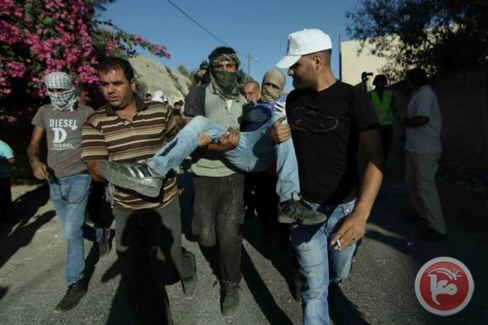 An Israeli army spokesperson said that there was a ‘riot’ in Kafr Qaddoum, where protesters threw rocks and rolled burning tires at Israeli forces, who opened fire ‘using .22 caliber rounds towards the extremities of the main instigator and a hit was confirmed.’

On Friday in Kafr Qaddoum, Israeli forces shot and injured Mohammad Abdullah, 13, as well as Nasser Barham, 46, and Bashar Shtewei, 45, along with more than a dozen others across the occupied West Bank and East Jerusalem, during mass protests against Israel’s recent controversial actions at the Al-Aqsa Mosque compound in East Jerusalem.

Kafr Qaddoum is one of many villages that hold weekly marches, usually on Fridays, in opposition to Israeli occupational policies.

The main street out of the village, which leads to nearby Nablus — the area’s economical hub — has been closed to Palestinians for 13 years.

According to the Applied Research Institute of Jerusalem, more than 10 percent of the village’s land has been confiscated for the establishment of the Jewish-only settlements alone — Kedumim, Kedumim Zefon, Jit, and Givat HaMerkaziz.