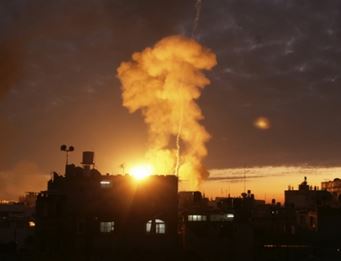 Israeli war jets fired, on Saturday at dawn, several missiles into different areas of the besieged Gaza Strip, causing excessive damage to homes and structures, while one Palestinian was injured. The army claimed it was retaliating to shells fired from Gaza.The WAFA News Agency said an F-16 Israeli fighter jet fired a missile at the al-Ersal Tower, on the Salaheddin Road, east of the Jabalia refugee camp in the northern part of the Gaza Strip.

The missile caused significant property damage, while one Palestinian was injured, and was moved to the Kamal ‘Adwan Hospital, in Beit Lahia nearby town. Many Palestinian children suffered anxiety attacks.

Another missile was fired into a concrete water reservoir, in Beit Hanoun, in the northern part of the Gaza Strip, causing serious damage.

The Israeli army claimed the attacks came in retaliation to two shells, allegedly fired from Gaza into nearby Israeli areas.

Israeli Ynet News has reported that one shell was fired from Gaza, late on Friday at night, hitting an open area, in a residential area, in the Negev town of Sderot, causing damage to a home and a bus; no injuries were reported.

It added that another shell was fired into Ashkelon (Asqalan), but the Iron Dome missile interception system managed to shoot it down.

It is worth mentioning that, on Friday at night, an Israeli drone fired a missile into an agricultural land, north of the Gaza Strip, causing damage but no injuries.