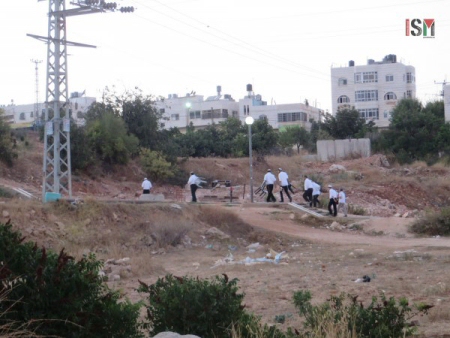 The children of the Jabari family in Jabari neighbourhood of al-Khalil are singing along to a Palestinian children’s television show. It is a sunny Saturday morning but in the small living area, six tiny children sit with their mothers who explain to us that they do not go outside because of the settlers. They quietly recite every word of the television songs to themselves.

With the massive illegal Israeli settlement, Kiryat Arba – home to nearly eight thousand Israeli settlers, directly facing their home, Saturday morning’s aren’t the only time the Jabari family is being affected. They have a newly built synagogue behind them, along with an Israeli police station. All are connected by a path that brings settlers along the family property on a regular basis. “The settlers jump behind our home in the night. They bang on the children’s windows and terrorize them.”

International human rights observers from the ISM and others have been providing protective presence for the family who, with so many children living in the home, haven’t had running water since the second Intifada. Their well, fronting the home, contains more trash than water and once they are able to procure the resources to repair it, it is subject to the same assault the family themselves endure month in and month out.

“During the Jewish holiday, the settlers filled the streets praying loudly. They shouted curse words at us.” Settlers had built a synagogue tent structure in recent months which was ordered demolished by the Israeli court system. Yet even with this small justice being done, a greater injustice persists. The land, belonging to Palestinians, has now been declared by Israeli forces to be a ‘closed military zone,’ which makes it off limits to all but Israeli military personnel.

However, settlers routinely frequent the area to pray under the protection of the Israeli army, while Palestinians are barred completely from entering. For the Jabari family, protective presence carries on as does the settler violence, harassment and constant intrusion into their lives.