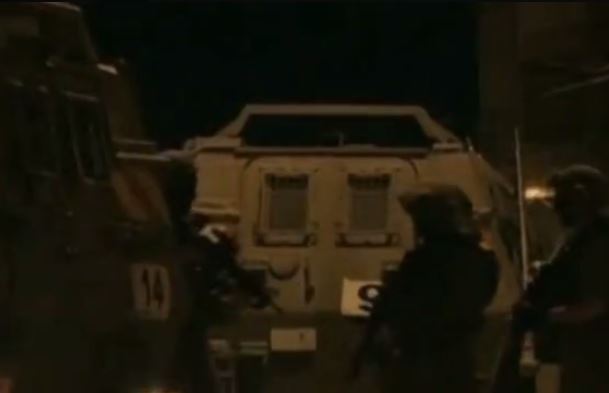 Israeli soldiers invaded, on Sunday at dawn, several Palestinian communities in the West Bank districts of Jenin and Ramallah, searched homes and kidnapped four in Jenin, and two in Ramallah. One of the kidnapped was shot by army fire prior to his abduction.
Several military vehicles invaded the Jenin refugee camp, and Jabal Abu Thheir area in the northern West Bank city of Jenin, before the soldiers stormed a number of homes and violently searched them, causing property damage.

The invasion led to clashes between the soldiers and many local youths; the army fired gas bombs at the protesters and a number of homes, in addition to firing concussion grenades; several Palestinians suffered the effects of tear gas inhalation.

On Saturday at night, Israeli extremists opened fire on a Palestinian car near Beit Dajan village, east of the northern West Bank city of Nablus.

Resident Ammar Sarkaji said he was driving near the main entrance of the village, and that his daughter was with him. The attack led to property damage but no injuries.