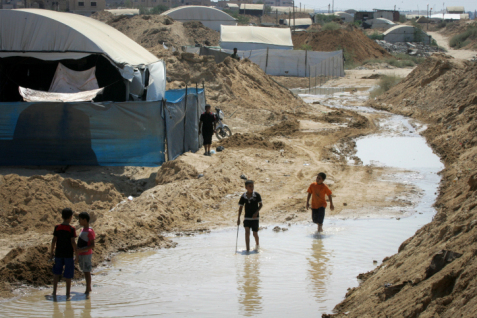 On Friday morning, the Egyptian army started to pump large amounts of sea water into large pipes that have recently been extended across the border connecting Gaza and Egypt, in an attempt to destroy tunnels used to smuggle goods into the besieged coastal enclave.According to the PNN, one of the tunnel owners, a Palestinian man who goes by the name of Abu Mohammad, told Anadolu Agency that “the Egyptian army started pumping large amounts of water from the Mediterranean Sea into the tunnels through large underground pipes that have hundreds of holes in them. These pipes were extended in the past in a trench that extends across the borders between Egypt and the Gaza Strip.”

Abu Mohammad also explained that large amounts of water flooded the tunnels that were used to smuggle food, medicine and construction materials from Egypt to Gaza. This caused some tunnel owners to use large pumps to get the water out of the tunnels in order to prevent them from caving in. However, he doubted that the tunnel owners would be able to keep up with the amount of water pumped in by the army.

A Palestinian security source, who spoke on condition of anonymity, said that the aim of the Egyptian army’s actions is to destroy the tunnels that extend under the borders without having to identify their locations.

Bulldozers and diggers belonging to the Egypt government are seen at the Rafah border line as the Egyptian army line up pipes into the ditches to pump sea water in the tunnels at Rafah, Egypt on September 18, 2015. The project, billed as an Egyptian military-operated fish farm, effectively would fill the border area with water and is designed to put an end to the last remaining cross-border underground smuggling tunnels. Images by Anadolu.