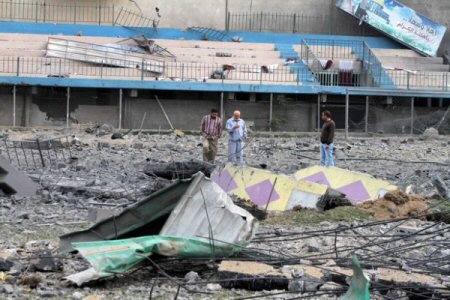 More than 30 Brazilian social movements and progressive organisations had called on the Brazilian government to exclude International Security and Defense Systems from Olympics contracts, after the Israeli company announced in October 2014 that it had been awarded a $2.2 billion deal to coordinate security at the games.On April 8, the Ministry of Justice’s Special Secretariat for Mega-events (Sesge/MJ) replied to their letter by explaining that ISDS has not been awarded any contracts.

According to the PNN, the reply from Sesge/MJ also stated that “any contract made by Rio 2016 won’t result in compromises by the Brazilian government”, a phrase campaigners are interpreting as a clear sign that government officials were sympathetic to their demands.

Jaman Juma, coordinator of the Stop the Wall movement, said on behalf of the movement that “boycotting this company is paradigmatic: Israel develops its methodologies and technologies through the killing and repression of the Palestinian people, and then it sells them worldwide. The end of military and security relations with Israel is an act of defense. Not only for the Palestinian people, it is an act of defense for humanity.”

Julio Turra, executive director of the biggest Brazilian workers’ union, CUT, one of the signatories of the letter to Coesrio 2016, said that CUT was glad with the information the government distances itself from ISDS.

“It would be illegal and shameful to hire a company that develops its technologies in complicity with Israeli crimes and that accumulates complaints about its participation in Central American dictatorships,” Turra said.

Mahmoud Nawajaa, General Coordinador of the BDS Palestinian National Committee (BNC) also welcomed the fact that the Brazilian government categorically states it has no commercial relation with ISDS.

“We expect that no similar company will be hired. It is important that Brazil walks towards a fully military embargo against Israel. Nawajaa said.

“Brazilians can be sure they will have the support from the Palestinian and international civil society on this campaign against ISDS in the Olympic Games,” he added.

As for future actions, Soraya Misleh, from the Front in Defense of the Palestinian People explained that there will be a wide campaign against the contract celebrated with the 2016 Organizing Committee which makes ISDS an ‘official supplier’ for the Games.

“We won’t allowed the Olympic Games in our country to have such company’s logo in its publicity. It is an insult against all those who believe in human rights and justice,” said Misleh.

Maristela Pinheiro, from the Rio de Janeiro Committee in Solidarity with the Palestinian People added that there will be for sure a strong campaign against the supplier deal between ISDS and the 2016 Organizing Committee and we’ll keep monitoring Coesrio. “The Olympics can’t beneficiate companies that profit through human rights violations. The Games can’t be intensifying repressive practices in our country, or endorse illegal and immoral actions”.

To his part, Felipe Butelli, from the Christian Group Kairos Brazil said that the call for military embargo has the support of important international names, the Nobel Peace Prize winners Desmond Tutu and Perez Esquivel among them. Brazil can’t follow on the opposite direction.