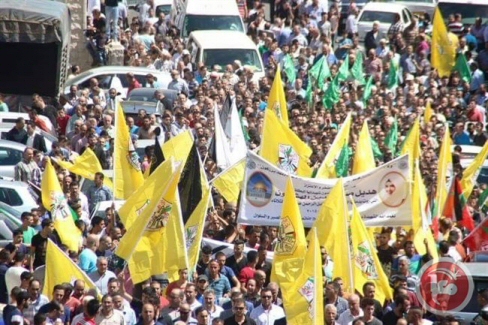 Hundreds of mourners attended the funeral of 18-year-old Hadeel al-Hashlamon, on Wednesday, a day after the teenager was shot dead by Israeli forces at a checkpoint in Hebron, as a key eyewitness refuted claims she had attempted to stab Israeli soldiers.Crowds of mourners carried the teenager’s body through the city for her burial, condemning her killing and vowing revenge for the shooting.

Participants raised the flags of Palestinian political factions during the funeral, calling for unity in the face of Israel’s military occupation.

She was then laid to rest in the martyrs cemetery in the city. Israeli forces had transferred al-Hashlamon’s body to her family late Tuesday.

The 18-year-old was shot at a checkpoint at the entrance of Hebron’s central al-Shuhada street, after allegedly attempting to stab an Israeli soldier, according to the Israeli army’s official account.
No Israeli soldiers were injured during the incident, and Israeli authorities presented no evidence of the alleged stabbing attempt.

A key eyewitness to the incident, Fawaz Abu Aisha, who can be seen in pictures published by Youth Against Settlements, told Ma’an that he was on his way to work at 7:40 a.m. when he heard Israeli soldiers at the checkpoint in Shuhada Street shouting loudly in Hebrew.

At first he thought they were shouting at three Palestinian children he had seen in the area, but after approaching the checkpoint he saw they were talking to Hadeel, telling her to get away from the area.

Fawaz began to explain to the teenager, who did not understand Hebrew, what the Israeli soldiers were saying, and she attempted to leave the main checkpoint area via a movable barrier at the side.
Israeli soldiers fired a warning shot at the ground and asked her to stop, before firing another warning shot. Abu Aisha asked the soldiers to let him explain to her what they were saying but they refused and told him to leave the area.

An Israeli soldier then fired a third warning shot at the teenager before aiming his weapon at her and shooting her in the left leg. One more shot was fired at her right leg and then four more into her chest and abdomen as she lay on the ground, Abu Aisha said.

Another shot was then fired at her body as she lay on the ground, he said.
The eyewitness said the entire incident lasted around six minutes and Hadeel did not speak to the Israeli soldiers or resist in any way during that time.

An Israeli army spokeswoman said that an attack on soldiers at the checkpoint had been ‘thwarted.’
A local activist group, Youth Against Settlements, later released photos of the incident appearing to also contradict the army’s account of events.

They appear to show the girl without any knife and at some distance from the soldiers before they opened fire.

Video footage from local new agency PalMedia, meanwhile, showed the teen left bleeding on the pavement, reportedly for up to 30 minutes, before she was roughly dragged away by an Israeli soldier, with soldiers and heavily armed settlers looked on.