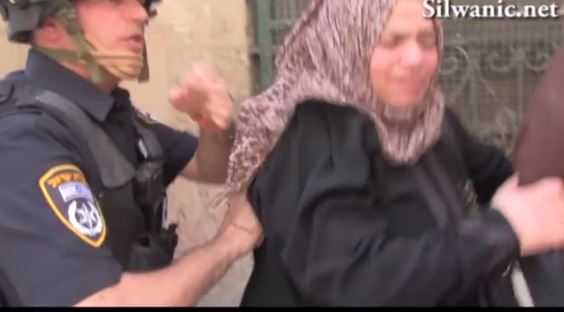 Israeli soldiers have kidnapped, on Wednesday at night and Thursday morning, fourteen Palestinians in occupied East Jerusalem, including one of the guards of the Al-Aqsa Mosque.A worker of the Islamic Waqf Department said the soldiers kidnapped Hamza Nimir, one of the mosque guards, and took him to Beit Eliyahu police station, before moving him to the al-Qashla station, near the Hebron Gate.

The Palestinian was kidnapped after arguing with a soldier who was harassing worshipers, marking Eid Al-Adha Muslim feast.

The soldiers also invaded and searched Palestinian homes in various neighborhoods in East Jerusalem, and kidnapped 13 Palestinians, including several children, allegedly for involvement in recent clashes with the army and police.

Head of the Jerusalem office of the Palestinian Prisoners Society (PPS) Nasser Qous condemned the Israeli escalation and violations in occupied Jerusalem, and said the soldiers and police have kidnapped more than 160 Palestinians, in the last eleven days.

Eyewitnesses said the soldiers fired rubber-coated steel bullets, and a concussion grenade, into the yard of a home in Ras al-‘Amoud, before handing a young man a military order for interrogation.

Similar orders were handed to several other local youths in the area, Silwanic said.

In addition, soldiers invaded Sur Baher village, in Jerusalem, and searched a number of homes, before kidnapping one Palestinian identified as Abdul-Karim Khleilo, 18 years of age.

The invasion and abductions are part of daily violations carried out against the Palestinian people, their homes and property in different parts of the occupied territories.