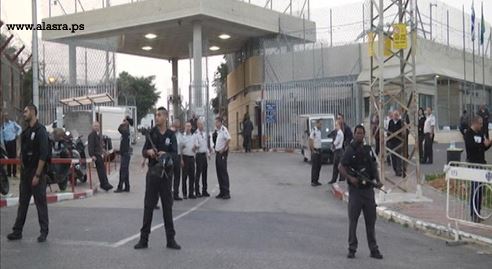 The Husam Society for Detainees and Ex-Detainees has reported, Thursday, that the Israeli Prison Authority forced nine Palestinian detainees in solitary confinement, and denied them the right to family and lawyers’ visits for two months.The society stated that the Prison Authority transferred Dia’ al-Agha, Abdul-Rahim Abu Holi, Salah Sudani, Mustafa Abu Ghazal and Rajab Baraka to solitary confinement in section 10 of the Gilboa’ Prison.

They were all held in room number 48, in section 10 of the Nafha prison before being moved Gilboa’.

The Prisoners’ Center for Studies (Ansar) said that, on Tuesday morning, the prison administration in Nafha prion denied the detainees access to many achievements they gained through hunger strikes, including family visits and access to TV in the main hall.

In a letter leaked from Nafha prison, the detainees said they are facing serious escalations and violations, especially after the soldiers conducted frequent assaults against them, a few days ago, mainly in section 10.

They warned that the situation could reach a dangerous level of escalation, and called on local, regional and international human rights groups to intervene, and to defend all detainees, especially those holding hunger strikes.

Dr. Majdi Salem, Ansar’s media officer, demanded an end to the Israeli escalations, and its violations of International Law and the Fourth Geneva Convention, and called for ending all Administrative Detention policies, holding hundreds of detainees for extended periods, without charges or trial.

He added that Israel’s crimes and violations must be brought to the International Criminal Court, and called for exposing those violations, to isolate it, and oblige it to end its violations.