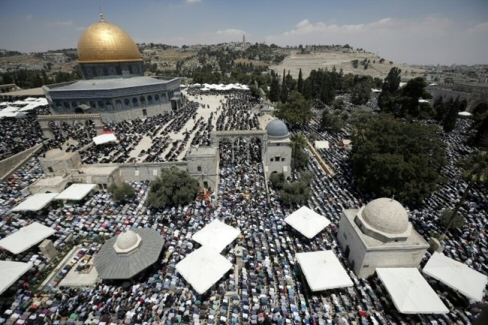 Israeli authorities have issued a 48-hour ban on Palestinians from entering the Old City in occupied East Jerusalem, following two stabbing attacks in which two Israelis were killed and three injured at the site, an Israeli police spokesperson said.

The two Palestinians who allegedly committed the stabbing attacks were shot dead on scene in the separate incidents, hours apart.

Police spokesperson Micky Rosenfeld told Ma’an News Agency that the ban on Palestinians entering the Old City was put in place in order to ‘prevent any further incidents or attacks.’

He said that extra police officers have been deployed across East Jerusalem.

An official in the Palestinian Authority Ministry of Endowment, which is responsible for the Al-Aqsa Mosque compound, told Ma’an that more than 100 right-wing Jews toured the compound on Sunday morning escorted by Israeli officers, while Palestinians were banned.

Before the restriction on Palestinian entry was announced, Palestinian shop owners in the Old City declared a closure off all businesses at the request of Islamic and nationalistic factions and in protest against the recent escalations around the Al-Aqsa Mosque compound.

In the East Jerusalem village of al-Isawiya , Israeli forces raided the home of Fadi Alloun, a 19-year-old who was allegedly responsible for Sunday morning’s stabbing attack on a 16-year-old Israeli during the earliest hours of Sunday morning.

Alloun’s aunt, Haifa Alloun, told Ma’an that the family rejected the accusation that her nephew had stabbed an Israeli teen before being shot dead by Israeli forces, saying Alloun was instead ‘targeted and killed in cold blood.’

However the family of Mohannad Halabi, the young man responsible for Saturday’s attack in which two ultra-orthodox Israelis were killed and two more wounded, including a 2-year-old child, accepted and praised Halabi’s attack, calling him a ‘martyr’ for Al-Aqsa.

The flashpoint Al-Aqsa Mosque compound has been the site of clashes for weeks, with Israeli forces repeatedly storming the holy site to clear way for Jewish worshipers during a series of Jewish holidays.

The most recent of these, the eight-day Sukkot festival, began on Sunday, and has seen severe restrictions imposed on Palestinians seeking to enter the compound.

Palestinians fear Israel is seeking to change rules governing the site, where Jews are allowed to visit, but not pray to avoid provoking tensions.

Last month’s flareup prompted calls for restraint from both the United Nations and the United States, and a warning from Jordan, which has custodianship rights over Muslim holy places in Jerusalem under its 1994 peace treaty with Israel, that relations were on the line.

On Tuesday, Palestinian president Mahmoud Abbas warned of the ‘risk of an intifada’ if clashes over the Al-Aqsa Mosque compound continue.