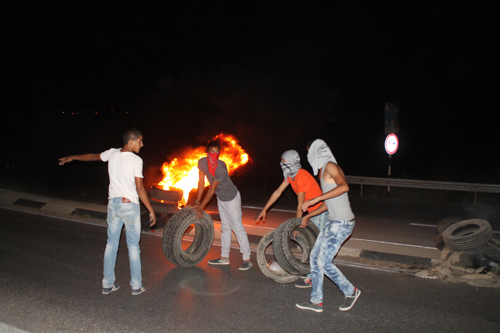 Israeli soldiers attacked, on Tuesday at night, Palestinian protesters, kidnapped six, near the northern West Bank city of Jenin, and wounded two others in the southern West Bank city of Hebron. Palestinian residents foil an attack by Israeli extremists in Qalqilia.Media sources in Jenin said the soldiers used excessive force against Palestinian protesters, near the al-Jalama roadblock, and kidnapped six residents, after assaulting them, and took them to an unknown destination.

The clashes took place after the soldiers used excessive force against dozens of nonviolent protesters marching against the escalating Israeli violations and assaults against the Al-Aqsa Mosque in occupied East Jerusalem, and the military escalation in the West Bank.

In addition, two Palestinians were shot with Israeli rubber-coated steel bullets, after the army attacked protesters in Bad az-Zawiya area, in the center of Hebron city.

Medical sources said the two Palestinians, 19 and 22 years of age, were moved to the Hebron governmental hospital.

Furthermore, dozens of Israeli extremists gathered near Jeet village, east of the northern West Bank city of Qalqilia, and attempted to invade it, but the residents intercepted them, forcing them to run away.

Israeli extremists also gathered near the main entrance of Majdal Bani Fadel village, southeast of Nablus, and blockaded it with rocks.

In related news, the Palestinian Ministry of Health (MOH) in the occupied West Bank has reported that at least 129 Palestinians were injured by Israeli army fire, and gas bombs, in different parts of the West Bank, Tuesday, and that the soldiers deliberately targeted medics and journalists.

Videos: ‘Hundreds March In Jaffa Against Israeli Escalation And Violations’