VIDEO: What Was Abdul-Rahman Doing in the Last Few Minutes of His Life? 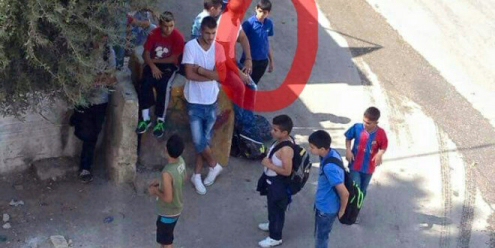 His family are demanding answers. The boy was shot just yards from his school gate whilst still wearing his uniform and witnesses said there was no evidence or justification for his killing.

During the child’s funeral today, which was attended by thousands of Palestinians, PNN investigated the circumstances of his assassination.

We can confirm that Abdul-Rahman was an 8th grader at the UNRWA (United Nations Relief and Works Service) boys’ school in Aida refugee camp. He was fatally shot in the chest, whilst still wearing his school uniform and backpack.

Layan Al-Azzeh, a woman in her 20s from Aida refugee camp, told PNN that Abdul-Rahman had been standing around two metres from the school gates, and was on his way home.

She told reporters the violence had been ongoing, saying: “The soldiers yesterday [Monday], since the morning, would open fire, rubber bullets and teargas on people walking on the streets.”

Munther Amira, head of the Popular Struggle Coordination Committee, today told PNN that Abdul-Rahman had been assassinated whilst playing under the flag of UNRWA.

He insisted that the Palestinian struggle for freedom would continue to grow.

He said: “We, Palestinians will continue struggling against this occupation, and we are going to take the Israeli leaders to the International Criminal Court (ICC) as they give direct orders for their soldiers to kill [children as] AbdulRahman.”

Salah Ajarma, director of the Lajee community centre in Aida camp, said: “We call on the international community and human rights organizations to look after the Palestinian children, and secure them from the ongoing Israeli occupation.

As the dust settles on the funeral of AbdulRahman, a new force is rising across the west bank.

Clashes here are expected to continue into the night, and with four Palestinians dead and more than 500 injured in the West Bank in the past few days, the eyes of the world are once again turning towards Palestine, the heart of the middle east.

Also in Human Interest: Signs of Increasing Suicide in Gaza