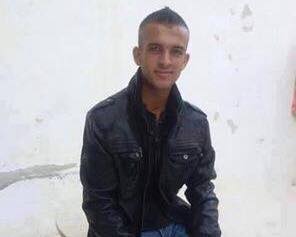 Israeli sources have reported, Wednesday, that a young Palestinian identified as Hatem Al-Jundi (17) years from Yatta
was shot dead by Israeli soldiers. Although the Israeli military claimed that Al-Jundi took a weapon from an Israeli soldier in Kiryat Gat, south of Tel Aviv, and ran into a nearby building, that claim remains unconfirmed.

Israeli Ynet News said the Israeli military told them that a soldier struggled with the Palestinian, and suffered a mild injury to his head. But the army has not identified the allegedly wounded soldier.

The suspected attacker managed to flee the scene into a nearby residential building, allegedly carrying the weapon.

A video published by the “Jewish Press News Agency” shows the soldiers running into the building, while the person filming, apparently from a window in the second floor, was telling them “he [the attacker] went into this building.”

According to the Israeli report, a short exchange of fire took place, before the soldiers shot the boy dead.

Two Injured, One Seriously, By Israeli Fire In Bethlehem