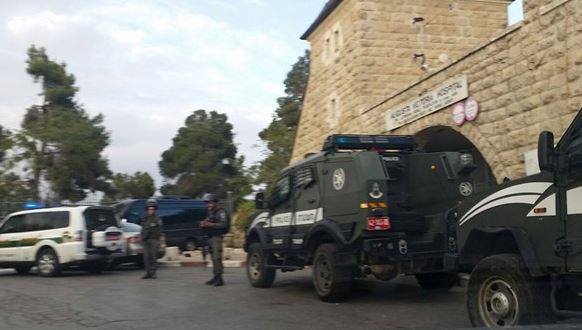 Several Palestinian hospitals in occupied Jerusalem have been the frequent target by the Israeli soldiers, who do not only attack ambulances and medics, but are also invading the medical centers, including their Urgent Care units, in Jerusalem and the rest of the West Bank.On Saturday, the soldiers assaulted many Palestinian medics in Bab al-‘Amoud in occupied Jerusalem, after the army killed one Palestinian and wounded dozens with rubber-coated steel bullets.

After attacking medics and ambulances, the army invaded the al-Makassed and Augusta Victoria Hospitals in occupied Jerusalem, and searched them for wounded Palestinians.

Similar attacks took place in September and the beginning
of this month.

Just a couple of hundred meters away, the soldiers invaded Augusta Victoria Hospital, and searched several sections and rooms, including the Operations Room and Urgent Care.

A week ago, the soldiers closed the main gate of al-Makassed, held many medics and ambulances for more than thirty minutes, under gunpoint and threat of death.

They also kidnapped a wounded Palestinian, from the al-‘Isawiyya town in Jerusalem, after forcibly removing him from the ambulance that was rushing him to hospital.

September also witnessed various attacks, including an invasion into the al-Makassed Hospital, when the soldiers inspected all admission records to look for wounded Palestinians, in addition to searching patients’ rooms, offices and X-ray departments.

He said that such invasions were another serious indication that Israel has no respect of any international agreement and laws, protecting patients and medical centers, and nations living under occupation.

He called on the International Community to act and provide the needed protection to the Palestinian people, and to hold Israel accountable for its violations against health-care workers and all medical facilities and property.