One Killed, Another Injured in Beit Shemesh after Alleged Attack 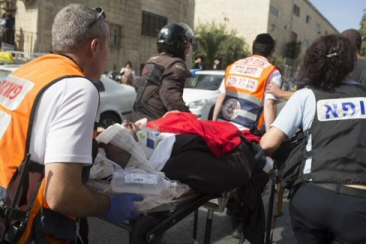 An Israeli police spokesperson told Ma’an News Agency that the two Palestinians attempted to board a bus in the city but were blocked from entering, before stabbing an Israeli man in his twenties. Israeli police arrived on scene and shot the suspected attackers.

The two men, along with the Israeli, were transferred to Hadassah hospital in Ein Karem.

Israeli media reported that one of the suspected attackers was dead upon arrival to the hospital, the other left in critical condition. The Israeli man sustained moderate injuries in his upper body.

The area of the attack was closed off following the incident and police are currently looking into the identity of the suspected attackers.

Religious Zionist website, Arutz Sheva, mirrored the account of statements by Israeli police, while Israeli news site Ynet initially suggested that the two Palestinians had tried to enter a synagogue and stab Jewish worshipers, but were first shot by Israeli police after stabbing an Israeli in the street.

A third Israeli site, Hebrew language NRG, quoted an eyewitness saying that he had started to follow the two suspects when a young Israeli woman he was with called the police and notified them of two ‘terrorists.’

According to the eyewitness, police officers arrived to the scene 20 minutes after the alleged attack, contradicting reports that the suspects were shot immediately after the stabbing.

Images shown by Ynet and NRG also prove contradictory, portraying different knives said to have been used by the attackers. While both images include a black knife, the knife in the photo provided by the Israeli police is different from the other photo passing through Israeli media.

Attacks have become near-daily across Israel, occupied East Jerusalem, and the West Bank this month.

Israeli forces also shot and killed a Jewish man in central Jerusalem late Wednesday night after mistaking him for a ‘Palestinian attacker,’ according to Israeli police and media.

As the number of Palestinians killed by Israeli forces since the beginning of the month nears 50, Israeli authorities have continued to champion a ‘shoot to kill’ policy towards alleged attackers that rights groups condemn as ‘extrajudicial executions.’

At least nine Israelis have been killed in attacks during the same time period.

B’Tselem last week acknowledged that while Israeli forces have authority to use the minimal amount of force to ‘protect the public,’ ‘law enforcement officers cannot act as both judges and executioners.’

Next month Israeli police officers will begin wearing cameras attached to their uniforms, according to Israeli daily Haaretz.

The decision was approved Monday in effort to ‘improve the public image’ of police and avoid ‘unnecessary mistakes’ by officers. The move is reportedly intended to lower current tensions.