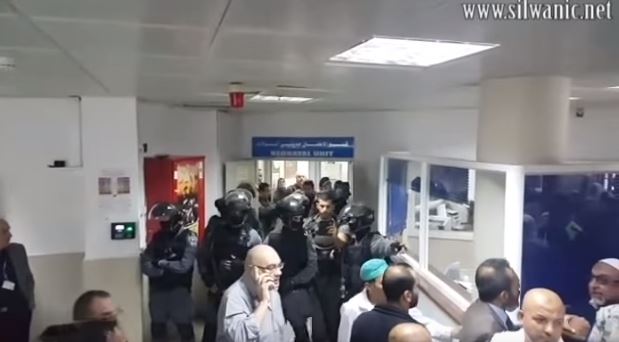 The administration of the Al-Makassed Islamic Charitable Society Hospital in Jerusalem has reported that the hospital has been a frequent target of Israeli military invasions and attacks, and that the soldiers are also trying to access patients’ records. Latest invasion was carried out Wednesday. Head of the hospital, Dr. Rafiq al-Husseini, said the employees and physicians have been repeatedly ordered to hand patients’ records to the army, including admissions and reasons for hospitalization, but they refused despite pressures and threats, and insisted on respecting the patients’ privacy.

On Wednesday, dozens of soldiers surrounded the hospital and invaded it, for the second consecutive day, and attempted to access medical files, especially the file of a Jerusalem child who was recently admitted, and was released later, before the soldiers kidnapped him.

Al-Husseini told the Maan News Agency that the soldiers found a prescription issued from the hospital in the home of the child from Jerusalem, and that the soldiers claimed ‘this is how they found out where he received treatment for his wounds, and came to the conclusion he was shot by the army.’

He added that the hospital is a charitable society, and frequently provides medical services to patients, and wounded Palestinians, without even opening new records for one-time visits.

Al-Husseini said neither the doctors, nor the administration, will ever violate the patients’ privacy, and will never provide Israel or any authority any information.

‘We have no legal responsibility to inform the occupation army and the police about anything we do in this charitable hospital,’ he added, ‘Our medical teams are here to help the patients, the wounded, and any person who needs our services.’

‘The Israeli military has invaded our hospital two days in a row; yesterday they even interrogated one of our doctors at a police station in Jabal al-Mokabber in Jerusalem, today, they invaded the hospital again and confiscated a computer that runs our surveillance system.’

Dr. al-Husseini also stated that the hospital believes the military invasions will continue, especially since they were never able to find records, or documents, in addition to the frequent threats, and attempts to intimidate the staff, including physicians and nurses.

He added that the soldiers also took the names and phone number of several employees, especially those who work in Emergency and Urgent Care Units, in order to summon them for interrogation.

Dr. al-Husseini stated that the Wednesday invasion targeted the administration building and the maternity ward, leading to arguments with the medical teams, the patients and their families who protested this outrageous violation.

‘The hospital became a repeated target for the Israeli army; they violate the patients’ rights on a daily basis,’ he said, ‘The Israeli violations against Palestinian medical facilities and crews violate International Law, the Fourth Geneva Convention and every related international resolution.”

The doctor also called on the international community to intervene, and provide the urgently needed protection to the Palestinian people, especially the patients.