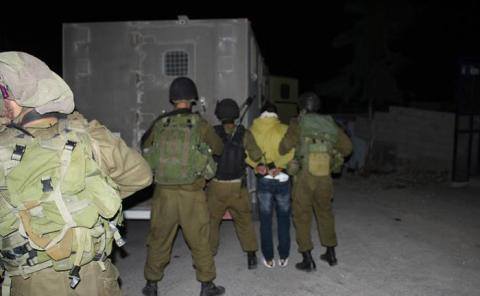 Two Palestinians have been kidnapped, on Thursday at dawn, by Israeli soldiers who invaded the central West Bank city of Tubas, while many residents, including two medics, suffered the effects of tear gas inhalation during ensuing clashes.Eyewitnesses said the soldiers kidnapped Jihad Mustafa Maslamani, after searching and ransacking his home. His father lives in Gaza after Israeli exiled him out of the West Bank.

The soldiers also invaded the al-Quds Bakery in Tubas, detained and interrogated the workers, and withdrew later.

Clashes took place between the invading soldiers and local youths, who hurled stones and empty bottles on them, while the army fired gas bombs, concussion grenades and rubber-coated steel bullets.

Dozens of residents, including two medics, identified as Sidqy Amin Abu Mohsin and Adnan Mohammad Ghanma, suffered the effects of tear gas inhalation. A family of seven was also among the wounded.

Also on Thursday, the soldiers kidnapped seven Palestinians in different parts of the southern West Bank district of Hebron.