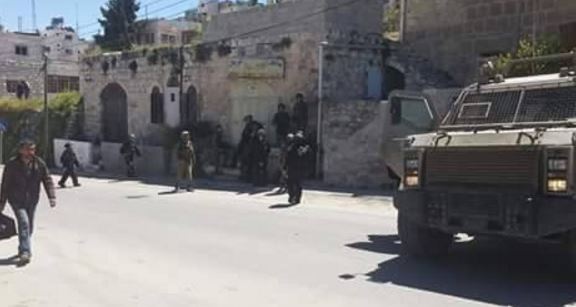 Two Palestinians, identified as Mohammad Aziz Roshdi and Tal’at Aziz Roshdi, were kidnapped from their homes in the al-‘Arroub refugee camp, south of Hebron.

The soldiers also attacked and injured Firas Khaled ash-Shamessly, 19, and kidnapped him along with ‘Odai Nidal Shreiteh in Yatta town, south of Hebron.

Another Palestinian, identified as Hazem Jibrin al-Jeyyawi, was kidnapped from his home in Ethna town, west of Hebron.

The army also installed roadblocks closing the main roads of Halhoul town, in addition to Hebron’s northern and southern roads, before stopping and searching dozens of cars, and investigated the ID cards of the passengers.

Moreover, a child, identified as Ali Walid Abu ‘Ayyash, 15 years of age, was kidnapped in Beit Ummar town, north of Hebron, after the soldiers stormed and searched his family’s home.

Media Coordinator of the Popular Committee against the Wall and Settlements in Hebron, Mohammad ‘Ayyad ‘Awad, said the soldiers have kidnapped nine Palestinians, including six children, in Beit Ummar since the beginning of this month.

Also on Sunday at dawn, the soldiers kidnapped child in Jerusalem, and a young man in Bethlehem after attacking and injuring his mother and sister.