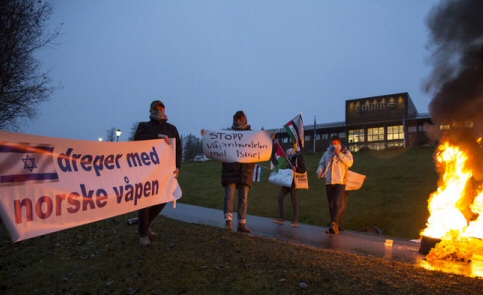 On Friday morning, activists from BDS Norway staged an intifada against leading arms producer Nammo Raufoss AS, in eastern Norway. In a symbolic demonstration, the activists protested against the Norwegian direct and indirect arms trade with Israel. According to the Alternative Information Center, the direct action was broadcast live from Tv2 Nyhetskanalen, a national news-channel. The protest was followed up by a petition to the government, demanding an end to all arms trade with Israel.

In the Israeli arsenal, there are weapons, ammunition and weapons components produced by Nammo AS or Nammo Talley, a subsidiary of Nammo AS in the United States. Israeli forces have killed thousands of Palestinian civilians in the last decade, many of them by using weapons with Norwegian components. Norwegian weapons thus become part of Israel’s violation of international law, the oppression of the Palestinians and the Israeli occupation of Palestine (West Bank and Gaza).

Although there are Norwegian laws prohibiting direct arms sales to Israel, Norwegian weapons are sold from the Nammo Group through its subsidiary in the United States, Nammo Talley. We believe that under no circumstances should Norway contribute to the illegal occupation of Palestine. We demand that no Norwegian-produced weapons or weapons components end up in Israel. The Nammo Group is a state-owned company. Therefore, this is a Norwegian political responsibility.

BDS Norway also took action against Nammo AS in August 2014. BDS has resolved to continue demonstrating until Norwegian authorities change both practice and legislation, so that the arms trade and collaboration with Israel ceases.