Israel to Dig ‘Groove’ around Gaza 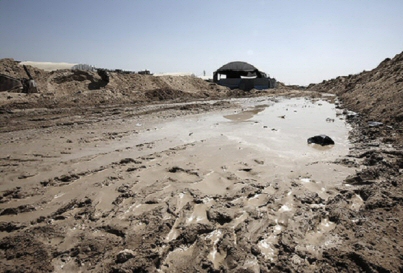 Israeli Defense Minister Moshe Ya’alon revealed, on Thursday, that his government would start digging a ‘groove’ around the Gaza Strip.
According to Israeli military radio, Ya’alon said that his army is ready to start digging the groove around the coastal enclave very soon.

The groove, he said, would be a deep and long hole in the ground to prevent infiltration from Gaza to Israel.v

Previously, informed and incredible sources told Days of Palestine that the Israeli army had already started working on the groove.

“They imported 150 new bulldozers and started working in a deep and long groove around the Gaza Strip, from the north and the east,” the source said.

He added: “The Israeli groove to be connected to the Egyptian, which already exists and is filled with seawater, from time to time.”

According to the source, who preferred to remain unknown, the Israeli occupation is also to fill their groove with water, in order to damage the tunnels dug by the Palestinians from Gaza to Israel.

After the Israeli occupation establishes the groove, the Gaza Strip would technically become an island, as it will be encircled with water from all sides.