Bennett: ‘We should have killed more terrorists’ (VIDEO) 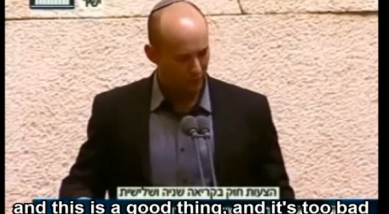 Israeli Minister of Education MK Naftali Bennett said, on Wednesday, that “[Israelis] should have killed more terrorists,” in response to the Arab MK (Member of Knesset), Hanin Zoabi’s condemnations of boasting about killing innocent civilians.PNN reports that Bennett’s statement came during the cabinet meeting, where MK Hanin Zoabi, from the Joint Arab List, tackled the ongoing Israeli slaughter of Palestinians and praising these murders by some MKs.

Zoabi also condemned the Israeli attacks on the Palestinian Islamic Resistance Movement (Hamas Party), as the organization’s offices were attacked and closed down by Israeli occupation authorities on Tuesday, knowing that the movement was not involved in any attacks on Israel.

Bennett immediately accused Zoabi of lying, then said that more Palestinians should have been killed, adding that “Anyone who lifts a hand against Israel must die.”

Since the beginning of October, this year, some 90 Palestinians have been killed by Israeli soldiers and settlers, in the wake of the current Palestinian uprising.

18 of the victims were children, four were girls, and the majority under the age of 19.

On the Israeli side, 16 soldiers and settlers have been killed. At least four of them were shot-dead by Israeli forces by mistake, because they looked like Arabs.