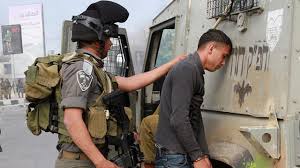 The Israeli army and police forces, on Wednesday, abducted at least 41 Palestinians, including minors, during predawn raids and searches in various West Bank districts, according to security sources and the Palestinian Prisoners’ Society (PPS).Israeli forces took a Palestinian identified as Youssef Taqatqa, aged 34, from the Bethlehem town of Beit Fajjar while he was crossing a checkpoint at the southern entrance of the Bethlehem town of al-Khader.

Furthermore, according to WAFA Palestinian News & Info Agency, Israeli forces detained another Palestinian from the Hebron town of Dura after summoning him. Nour Khallaf, 16, was detained after he appeared before Israeli intelligence in Kiryat Arba settlement.

This comes just two days after forces broke into the house belonging to Nour’s family and handed Nour an order to report to Israeli intelligence.

In the Ramallah district, army kidnapped seven Palestinians from the villages of Turmus Ayya, Mughayyer and Kobar. They were identified as Mohammad Salameh, Alaa Abdel-Jawad, Ra’ed Abu-Elayya, Nasser Rezeq, 18, and brothers Saleh Barghouthi and Assef Barghouthi. The two Barghouthi brothers were released a few hours later.

Meanwhile, PPS said that at least 16 Palestinians, mostly minors, were detained by Israeli police in Jerusalem during the past 24 hours, eight of whom were released hours later.

Meanwhile, forces broke into the towns of Surif, Yatta, and Beit Ummar in the district, where they abducted Zaid Abu-Fara, 20, Mohammad Shreteh, 22, Nizar Battoush, 17, and Mohammad Abu-Dayyeh, 16. The army searched the house of Abu-Dayyeh before detaining him.

In the meantime, Rateb Jabour, coordinator of the Anti-Settlement Committee in Hebron, said Israeli forces raided the Bedouin village of Janba, south of Hebron, and searched a number of tents and caves in the village after forcing their Palestinian residents to remain outside in the cold winter weather.

Meanwhile, Israeli soldiers kidnapped a Palestinian minor, unidentified yet, as he attempted to cross through an Israeli-controlled checkpoint outside Hebron’s al-Ibrahimi Mosque. He was transferred to an unknown destination.

Soldiers also detained another minor, whose identity remains unidentified, after beating him up.

In Jerusalem, Israeli security forces broke into the town of Anata, west of the city, and detained three Palestinians, identified as Mohammad al-Omari, Alaa Hamdan, and Mohammad Salameh.

Earlier last night, Israeli army carried out a raid and search offensive in Hebron city; local residents reported that Israeli soldiers raided their homes, forced several families, including children, to stay outside in the cold winter weather, ransacked amounts of money, as well as took over several rooftops and turned them into military outposts.

Soldiers further interrogated and verbally assaulted the homes’ residents as well as used tear gas canisters against them, which spread panic and fear among them, particularly children.

Forces reportedly obstructed the work of journalists at the scene during the night offensive; threatening to smash their cameras and arrest them, WAFA correspondence said.