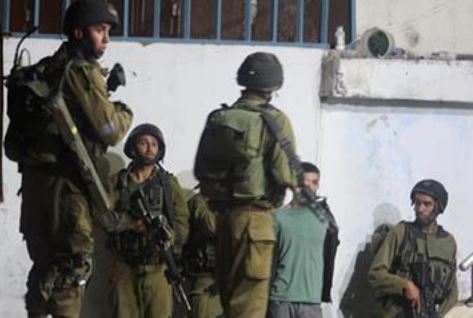 Mohammad Ayyad Awad, spokesperson of the Popular Committee in the town, said the soldiers kidnapped Wahid Hamdi Abu Mariya, 47 (a former political prisoner who spent 18 years in Israeli jails, and the brother of Falah Abu Mariya who was killed by army fire in his own home on July 23.)

The soldiers also invaded Abu at-Touq area, in Beit Ummar, and photographed former political prisoner Naseem Khader Al-‘Allami, in his own home, in addition to photographing several nearby homes.

In related news, the soldiers handed a child, identified as Abada Samir Mohammad al-‘Allami, only eleven years of age, a military warrant for interrogation in the Etzion base.

It is worth mentioning that the army has kidnapped at least 22 Palestinians in Beit Ummar, since the beginning of this month.

In addition, the soldiers invaded the al-‘Arroub refugee camp, north of Hebron, and kidnapped Naim Aziz Roshdi, and a high-school student, identified as Noureddin Badran Jawabra.

Two Palestinians, identified as Amjad Dergham Tarayra, and Tha’er Jamil Ehmeidat, have also been kidnapped from their homes in Bani Neim town, east of Hebron.

In Hebron city, the soldiers invaded various neighborhoods, searched several homes, and installed roadblocks closing the main roads of Beit Ummar, Sa’ir and Halhoul towns, Hebron’s northern road, and the al-Fawwar refugee camp, before stopping and searching dozens of cars and interrogating the Palestinians while inspecting the ID cards.