Palestinian Killed after Alleged Attack in Jerusalem, Teen Shot in the Back during West Bank Clashes 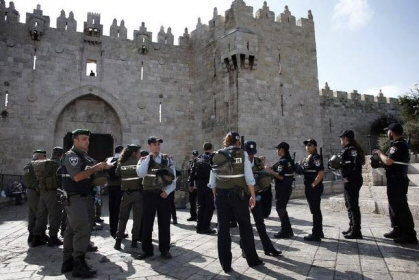 A Palestinian man was shot dead after he allegedly injured two Israelis in a stabbing attack in the center of Jerusalem, on Saturday night, according to Israeli police.An Israeli police spokesperson said that the Palestinian (later identified as Omar Yasser Skafi, 21 years old) was shot and killed after he allegedly hit one Israeli with his car, before stabbing another with a knife.

He went on to say that both Israelis had been lightly injured. He had initially said that a third Israeli was injured, but later stated that this person was treated for shock.

It was not initially clear whether the Palestinian was actually involved in this second injury, with Israeli newspaper Haaretz reporting that he appeared to have been ‘hit by a vehicle that passed by the scene as he was attempting to flee.’

The scene — reportedly in in West Jerusalem’s Romema neighborhood — was closed off by Israeli police, according to Ma’an.

Human rights groups have repeatedly condemned Israeli forces for excessive use of force against Palestinians who did not pose an imminent threat.

Well over a hundred Palestinians have now been killed by Israelis since the beginning of October. While Israel alleges many of those were attempting to attack Israelis when they were shot, Palestinians and rights groups have disputed Israel’s version of events in a number of cases.

The attacks that have taken place — claiming the lives of 19 Israelis — have been accompanied by a wave of popular unrest that has swept the occupied Palestinian territory and Israel.

In related news, Israeli forces also shot and injured a Palestinian youth with live fire, on Sunday, during clashes in Beit Furik village, in the northern occupied West Bank district of Nablus, a member of a local committe said.

Munadil Hanini, on the village’s central committee for the popular struggle, said that soldiers shot 18-year-old Muhammad Hamadna al-Imor in the back during clashes in the village, and took into Israeli custody four Palestinians from the area.

Hanini said Israeli forces invaded the village, provoking clashes, on the claims that Palestinian youth from Beit Furik had been throwing stones at passing Israeli cars in the area.

An Israeli army spokesperson said ‘dozens of Palestinians’ were throwing rocks in the area, but could not confirm clashes in the village.