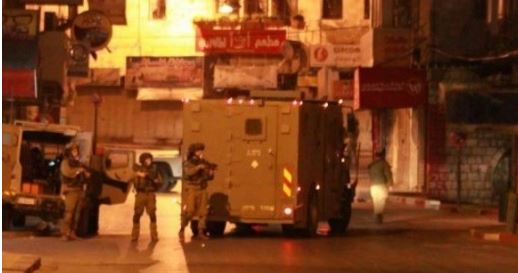 Israeli soldiers have kidnapped, on Monday at dawn, ten Palestinians, including three children, in different districts in the occupied West Bank, after invading and searching their homes.The soldiers invaded Halhoul town, north of the southern West Bank city of Hebron, and kidnapped a child with special needs, identified as Rashed Ali Abu ‘Asba, 13 years of age, in addition to Laith Bajes al-Baw, 16, and his brother Ahmad, 13.

Mohammad Awad, media spokesperson of the Popular Committee against the Wall and Settlements in Beit Ummar town, north of Hebron, said several military vehicles invaded the town, before the soldiers searched homes and kidnapped a former political prisoner, identified as Aktham Yousef Ekhlayyel, 25.

Awad added that the soldiers have kidnapped 14 Palestinians, including eight children, in Beit Ummar since the beginning of December, while the total number of Palestinians, kidnapped since October 1 in the town, has arrived to 90, including 41 children.

In addition, the soldiers installed roadblocks on the main entrances of Sa’ir and Halhoul towns, the northern road of Hebron, and the entrance of the al-Fawwar refugee camp, before stopping and searching dozens of cars, and interrogated many Palestinians while inspecting their ID cards.

Furthermore, the soldiers invaded several villages and towns, in the northern West Bank district of Nablus, searched many homes, and kidnapped three Palestinians identified as Mohammad Suleiman, 22, and Ghanem Mahmoud Abdullah, 22, from Qaryout village, south of Nablus, and Qoteiba ‘Azem, from Sebastia town, north of Nablus.

In related news, several Israeli military vehicles invaded the ‘Aida refugee camp, and the al-Obeyyat area, in Bethlehem, and summoned three Palestinians for interrogation in the Etzion military and security base, south of Bethlehem.

They have been identified as Sharafeddin Yassin Abu Salem, 19, Mohannad ‘Ayed Abu ‘Aker, 35, from ‘Aida, and Mohammad Ali Obeyyat, 18.