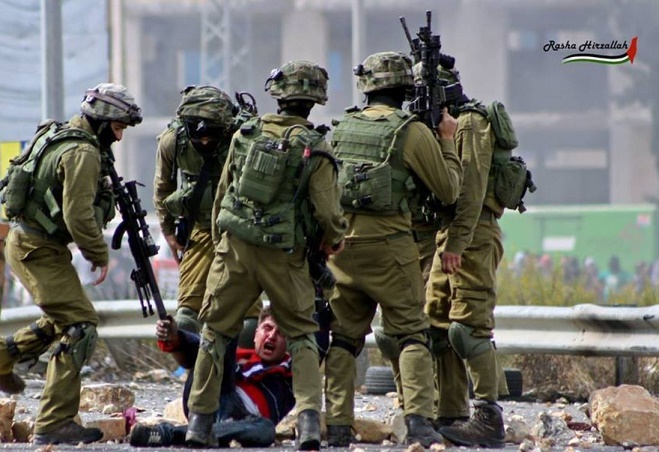 Israeli soldiers invaded, on Wednesday at dawn, various Palestinian communities in different parts of the occupied West Bank, broke into and ransacked dozens of homes, and kidnapped at least eleven Palestinians, in addition to wounding one in Bethlehem.Medical sources in Bethlehem said the soldiers shot and injured a young man, 25, with a live round in his thigh, in the Deheishe refugee camp, south of Bethlehem.

The soldiers also invaded and searched many homes, and kidnapped four Palestinians.

The kidnapped have been identified as Yazan al-J’eidi, 18, Hamza Ma’rouf al-Atrash, 24, his brother Mohammad, 22, and Emad Mohammad Shamroukh, 22. The soldiers also summoned many young men for interrogation in the Etzion military base.

In addition, dozens of soldiers invaded the Jenin refugee camp, in the northern West Bank city of Jenin, searched many homes, and kidnapped Ramzi Tawfiq al-Hindi, 21.

The soldiers also invaded the northern West Bank city of Tulkarem, searched many homes and kidnapped Mohammad Bilal Khamis, 25, after confiscating computers from the family home. In addition, the army searched a library, owned by Mohammad, and confiscated surveillance tapes.

Clashes took place between the soldiers and local youths in the Balata refugee camp, after the army searched many homes; the soldiers fired several concussion grenades, gas bombs, and live rounds.

Some of the invaded communities in Nablus are the towns of Tal, Beta and ‘Awarta, in addition to the refugee camps of ‘Askar and Balata.

The soldiers also, interrogated many young men, and threatened to assassinate them, including former political prisoner Samer Sharab, as the soldiers told him they ‘will be back to kill him,’ should they find out he is participating in the ‘Al-Quds Intifada.’

On Wednesday at dawn, the soldiers invaded Qalandia refugee camp, killed two Palestinians and wounded at least four others.