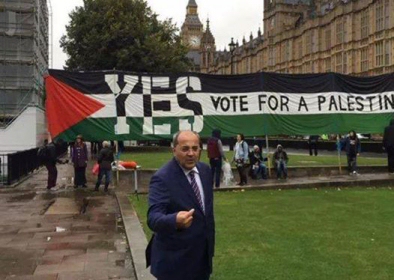 This video is from a speech made by Arab Member of Knesset, Dr. Ahmad Tibi, head of the Arab Movement for Change, who denounced recent racist statements of the leader of the right-wing group, Lehava, who called for the expulsion of non-Jews from Israel, and described the Christians as “bloodsucking vampires”. Translated to English from Arabic by Saed Bannoura:

“Members of Knesset, approximately two hours ago, my comrades Ayman Odeh, Osama Sa’adi and myself, visited the village of Beitello, northeast of Ramallah, where at night, a terrorist of the Price Tag Israeli group broke a window of a Palestinian home, about one after midnight, and hurled gas bombs into the building, where Hussein Najjar, his wife and child were sleeping.

“The question is how come gangs of Price Tag groups feel free to attack, to write racist graffiti such as ‘greetings from the detainees of Zion’. Why do they feel they can freely move around, invade Palestinian towns, and carry out ugly crimes, to kill and to burn entire Palestinian families?”

“I link all of this to what am reading and seeing today regarding Benzi Gopstein, the horrible things he said against the Christians, against the Muslims”, Tibi said. “He said the Christians are bloodsucking vampires that must be expelled.

Tibi went on to say, “Isn’t it enough you expelled the Christians from Eqreth and Birim village, as well as so many other towns? And, then, you attack Muslims too. What we are talking about, here, is the highlight of the Israeli racism.

“If those statements of Gopstein were said in German, they would have appeared much more difficult and racist, and even more realistic,” Dr. Tibi said. “Therefore, I am here telling him, you get out of here, you racist, disciple vile small, but very dangerous, person.

“The Jews who believe in coexistence and tolerance must rebel against people like this vile person, and all of what he represents. They must stand against incitement and violence, and here I repeated what Imad Shafe’ey said: ‘Shun the vile ignorant, as everything he says is what he really is’

“And, to Gopstein and his followers, I say this: the soles of our Christian brothers’ shoes are worth more than you and everyone who stands with you. The Christians in this country are the natives of the land.”