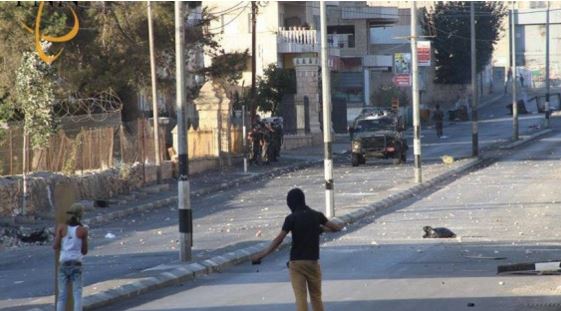 Israeli soldiers shot and injured, Friday, more than ten Palestinians in the West Bank district of Bethlehem, and four near the northern West Bank city of Nablus. Palestinian family in Bethlehem deliberately targeted with gas bombs fire into their home.Medical sources in Bethlehem said ten Palestinians were shot with rubber-coated steel bullets in Bethlehem and the nearby towns of al-Khader and Marah Rabah, while many others suffered severe effects of teargas inhalation.

The Red Crescent Society (RCS) in Bethlehem said at least two Palestinians were shot with rubber-coated steel bullets near Bilal Bin Rabah mosque, at the northern entrance of Bethlehem, and several others suffered the effects of teargas inhalation.

In addition, various members of Halabi Palestinian family, in Bethlehem, suffered severe effects of teargas inhalation after the soldiers fired many gas bombs directly into their home.

Linda Halabi told the Palestine News Network (PNN) that the soldiers deliberately and repeatedly fired gas bombs at their home, north of Bethlehem, causing many family members to suffer the effects of teargas inhalation.

Halabi was moved to the Beit Jala governmental hospital after the family voiced an appeal through the PNN after the soldiers started targeting their home; medics provided her family with the needed medical treatment.

The RCS also said that three Palestinians were shot with rubber-coated steel bullets, and many others suffered the effects of teargas inhalation, during clashes that took place after the soldiers invaded Um Rokba area, south of al-Khader town, south of Bethlehem.

In Marah Rabah area, south of Bethlehem, five Palestinians were shot with rubber-coated steel bullets; one of them was moved to the Beit Jala Hospital suffering an injury in his abdomen.

In Beit Forik town, south of the northern West Bank city of Nablus, the soldiers shot and injured two Palestinians with live rounds, and at least two others with rubber-coated steel bullets.

It should be noted that these attacks on Palestinian demonstrators in the Bethlehem area took place on the day when Christians from around the world were converging on Bethlehem for the annual Christmas celebration.

Two Palestinians were killed on Friday in separate incidents – one in Gaza, where Israeli troops attacked a number of demonstrations against the Israeli occupation, and one in Silwad, where troops shot a woman who was driving a car too close to them.