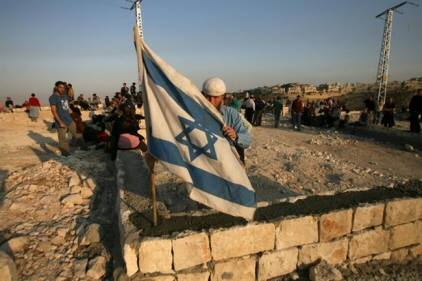 Israel’s Ministry of Housing has been working on plans for thousands of housing units in the controversial E1 corridor, despite the cancellation of tenders for the units in 2013, a settlement watchdog reported.International condemnation of settlement construction in the controversial area led Israeli Prime Minister Benjamin Netanyahu to cancel the tenders at the time.

Israeli watchdog Peace Now reported Sunday, according to Ma’an, that the Ministry of Housing began “quietly” planning for 8372 housing units in the E1 area in November 2014, hiring architects to work on many of the plans that had been cancelled.

The revelations are likely to spark controversy, as construction in E1 would effectively split the West Bank into separate northern and southern parts, making the creation of a contiguous Palestinian state nearly impossible.

The ministry’s plans include moves to retroactively legalize a number of illegal outposts in occupied areas, as well as to create urban continuity between illegal settlements to Jerusalem, the watchdog said.

One of many plans underway would place 800 housing units between Palestinian areas of Al-Jib and Biddu, connecting the illegal Givat Zeev settlement to Jerusalem, preventing a potential Palestinian West to East corridor, Peace Now said.

One thousand units for the Jahalin Bedouin are also being planned, so that the tribe can be evicted them from the area of the illegal Maale Adumim settlement and E1 and moved to the planned village, the group reported.

Construction plans for over 12 thousand housing units in occupied East Jerusalem and the Old City are also underway by the Ministry of Housing, the report said, adding that around half of 55,548 settlement units expected to be built through the ministry’s plans lie on the Palestinian side of the separation wall.

Yariv Oppenheimer, the director general of Peace Now, told Israeli daily Haaretz, “The government of Israel is not wasting a single day and is investing tens of millions of shekels in expanding and establishing new settlements.

“Behind the scenes they are secretly planning the establishment of a binational state,” he continued.
In a meeting with US President Barack Obama last month, Israeli Prime Minister Netanyahu said that settlements were “not a core issue” in conflict between Israelis and Palestinians.

The PM said that the refusal by Palestinian leadership to acknowledge Israel as a Jewish state was the only impediment to establishing an independent Palestinian state.

The Israeli PM also denied that settlement expansion was taking over a significant portion of Palestinian land, saying that the “total amount of built-up land is….maybe one tenth of one percent.”

Netanyahu’s statement came as over 200 Israeli settlements and outposts continue to expand over Palestinian land, connected by government-built infrastructure intended for Israeli use only.