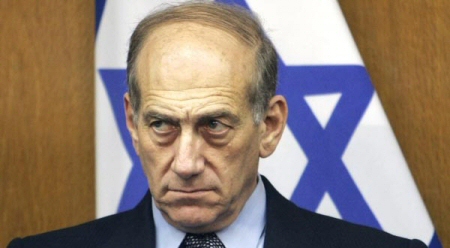 The Israeli Supreme Court, on Tuesday, reduced the sentence of ex-Prime Minister Ehud Olmert from six years to 18 months, with regard to his conviction for bribery scandal. According to AP/PNN, the court announced that Olmert will begin serving his sentence on Feb. 15 — the first Israeli leader to ever serve behind bars. Though the ruling marked a legal victory for Olmert’s team, the top court upheld part of his conviction for taking a lesser bribe.

Olmert, aged 70, was convicted in March of 2014, and sentenced to six years in a wide-ranging case in which he was accused of accepting bribes to promote a controversial real-estate project in Jerusalem. He was charged for acts that happened while he was mayor of Jerusalem and the country’s trade minister, years before he became prime minister in 2006, it was added.

Olmert has denied any wrongdoing and was allowed to stay out of prison until the verdict on his appeal was delivered.

After Tuesday’s verdict was handed down, Olmert said he was “satisfied” about his partial exoneration. He added that it was still a “hard day” but that he accepted the Supreme Court’s ruling.

“A stone has been lifted from my heart,” he said. “I said, in the past, I was never offered and I never took a bribe. And, I say that again, today.”

The ruling marks a dramatic climax for a man who, only years earlier, led the country and hoped to bring about a historic peace agreement with Palestinians.

Olmert was forced to resign in early 2009, amid the corruption allegations. His departure cleared the way for the election of hard-liner Benjamin Netanyahu, and subsequent Mideast peace efforts have utterly failed.