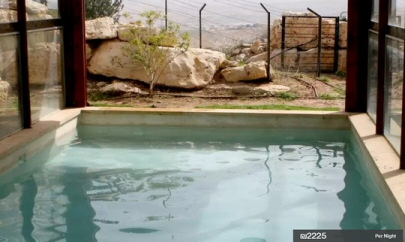 *Airbnb is enabling anyone to rent rooms and vacation homes in illegal Israeli settlements in the occupied West Bank.According to an article published by +972 Magazine, last week, the list of places to rent, some of them even luxurious cottages, make no mention of the fact that they are in illegal settlements on occupied Palestinian land.

Almost all on the list claim to be in “Israel” – despite the fact that they are in the occupied West Bank.

“Exploring the Airbnb website turns up dozend of cheap rooms and homes with pastoral views and many just a short drive from Jerusalem – all pretty enticing. Especially if nobody tells you that you’re paying to be a settler for a few days” – +972 M. reported.

The Magazine made a test, according to the PNN: they created a fake profile of an American citizen of Palestinian descent who want to come to visti and :enjoy the quieter and cheaper option of staying in an Israeli settlement” and started making reservations at dozens of listings and contacting dozens of Airbnb hosts – settlers.

The result: they only received one positive answer back, while all of the others stated that due to the political situation it wouldn’t be possible, or even did not replied them.

“Someone making a reservation on Airbnb has no way of knowing that the outpost was — at least partially — illegally built on Palestinian land. There is no mention of the fact that more than one resident of Havat Gilad have been convicted of violent “price tag” attacks against Palestinians and their property”, +972 M. stated.

The major problem for people that are not familiar with the Palestine situation, is that Airbnb’s website does not differentiate between rooms in Palestinian cities towns and those in Israeli settlements — its maps of the occupied West Bank display no differentiation between areas under Israeli control, and those under Palestinian control.

By charging for listings in illegal settlements in the occupied West Bank, Airbnb enables Israelis and foreigners alike to financially support the settlement economy and even profits itself off the theft of private Palestinian land.

+972 Magazine tried to contact Airbnb in California, but it didn’t receive any answer. When they contacted them with their fake profile, the company immediately answered saying that they were very upset with the situation.

*Airbnb was founded in August of 2008 and is based in San Francisco, California. In their website they are describe as: “A is a trusted community marketplace for people to list, discover, and book unique accommodations around the world — online or from a mobile phone or tablet.

Whether an apartment for a night, a castle for a week, or a villa for a month, Airbnb connects people to unique travel experiences, at any price point, in more than 34,000 cities and 190 countries. And with world-class customer service and a growing community of users, Airbnb is the easiest way for people to monetize their extra space and showcase it to an audience of millions”.