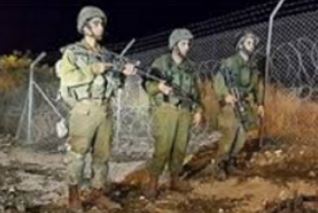 Israeli soldiers kidnapped, on Friday morning, a Palestinian police officer on a sudden roadblock installed by the soldiers on the main entrance of Ya’bad town, southwest of the northern West Bank city of Jenin.The Palestinian has been identified as Firas Hatem Amarna, 36; eyewitnesses said the soldiers stopped a Taxi, and forced Amarna out before cuffing and blindfolding him and took him to an unknown destination. He was heading back home from work.
Amarna’s brother was kidnapped, a few days ago, on sudden military roadblock, also at the town’s main road.

In related news, the soldiers summoned Ibrahim Mohammad Zoheir Reemawi, 32, for interrogation, after invading his home at dawn, in Beit Rima town, northwest of Ramallah.

Clashes took place in the town between the invading soldiers, and dozens of local youngsters. The army fired live rounds and gas bombs; no injuries were reported.