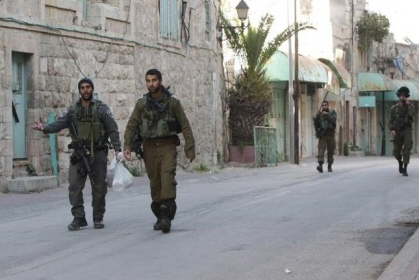 Israeli forces, Friday morning, evicted dozens of Israeli settlers from two buildings believed to belong to Palestinians in Hebron’s Old City, a day after the settlers forced their way into them.An Israeli police spokesperson said, according to Ma’an News Agency, that Border Police had removed more than 80 settlers from the homes. ‘All the people that illegally entered the buildings have been removed,’ he said.
He added that the homes were afterward ‘sealed and closed off,’ and that Israeli courts would determine their future status.

Israeli far-right news site Arutz Sheva reported, Thursday, that the settlers claim to have purchased the buildings from Palestinians.

The settlers stormed the homes in the tense city center, on Thursday afternoon, under the protection of the Israeli army and police forces. Arutz Sheva published video footage of the settlers thanking the soldiers and officers.
Jawad Abu Aisheh, deputy head of local activist group Youth Against Settlements, said that dozens of settlers broke through the buildings’ back doors and stormed the buildings.

He said: ‘The Border Police did not do anything to stop them.’

Instead, he said that police forces began firing tear gas canisters at Palestinians protesting the settlers’ actions.
He said that at least five Palestinians had to be treated for excessive tear gas inhalation.

Abu Aisheh added that the buildings belonged to Hebron’s al-Zakari family, and were being rented out to members of the al-Qafisheh family.

The decision by Israeli courts regarding the status of the homes comes as the Old City continues to stand at the heart of tensions in the occupied Palestinian territories.

The area — known as H2 and under full Israeli military control — is home to an enclave of Jewish settlers living in the center of the West Bank’s largest Palestinian city.

The flashpoint Old City was declared a closed military zone in November following the recent wave of unrest, and Palestinian residents have come under higher-than-average restrictions by the Israeli military that Israeli rights group B’Tselem has called “draconian.”

Friday’s settler eviction from the homes raised a row among Israeli politicians, with members of the Knesset, Israel’s parliament, threatening to leave Israeli Prime Minister Benjamin Netanyahu’s coalition if the buildings remain evacuated.

Israeli media reported that MK’s from political parties Likud and Habayit Hayehudi said they would no longer be obligated to stay in the coalition and would work to bring down the government if the eviction continues.