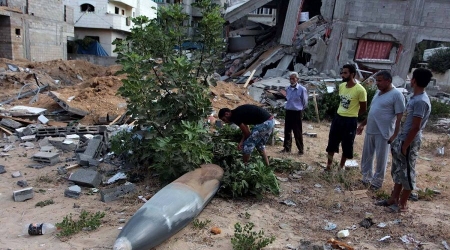 A year after the 2014 Israeli offensive against the Gaza Strip, 70% of the unexploded ordnance (UXO) remains in the region, UNRWA reported on Tuesday.UNRWA stated, in a report, that more than 7,000 total explosive remnants of war are estimated to remain in Gaza. Only 30% have been removed, while the remaining 70% continues to pose a threat to the population of the besieged enclave, especially children and adults who work on agricultural lands.

It was added that, since the beginning of last summer’s hostilities, 16 people were killed and 90 wounded, including 38 children, due to contact with these unexploded remnants.

The report further noted, according to Al Ray, that UNRWA and the UN Mine Action Service, with the support from the Italian Directorate General for Development Cooperation of the Ministry of Foreign Affairs and International Cooperation, would conduct a wide-range of outreach activities on safety and risk education on the matter.