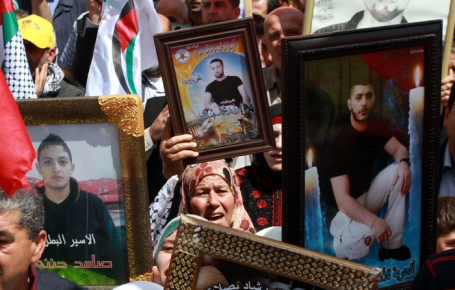 With a snow storm expected to hit the region by Monday,young Palestinian prisoners in Israel’s Hasharon prison have complained about being deprived of a necessary heating system, according to the Palestinian Prisoners Society (PPS).An attorney with PPS said, according to WAFA, after having visited minor Palestinian detainees in Hasharon, central Israel, the Prison Service has banned prisoners from buying electric heaters and deprived them of sufficient winter blankets.

There are some 450 minors in Israeli jails, 41 of whom are in Hasharon.

Although the UN Convention on the Rights of the Child defines a “child” as “every human being below the age of eighteen years”, according to Israeli military order 132, Palestinian children age 16 and older are tried and sentenced by Israeli military courts as adults.

Addameer prisoner rights group says that “by comparison, juvenile legislation defines Israeli children as age 18 or younger. What’s more, a Palestinian child’s sentence is decided on the basis of the child’s age at the time of sentencing, and not at the time when the alleged offense was committed.”