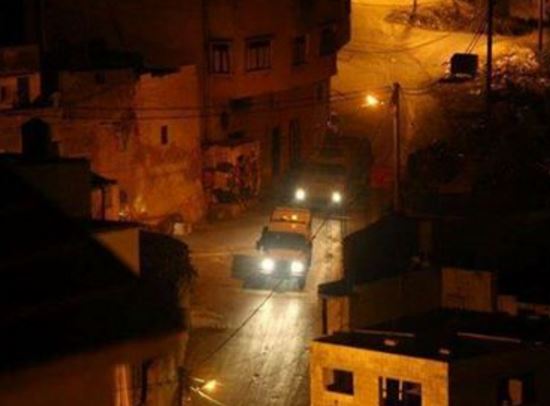 Israeli soldiers invaded, on Wednesday at dawn, the town of Qabatia, south of the northern West Bank city of Jenin, searched and ransacked many homes, kidnapped three Palestinians and assaulted two others.Several military vehicles invaded the town from various directions, and surrounded many neighborhoods, before the soldiers kidnapped three Palestinians, identified as Raed Abu M’alla, Mo’men Abu M’alla and Mohammad Ziad Odeh, all in their twenties.

Eyewitnesses said the soldiers caused property damage in the invaded homes, especially due to violent searched, and interrogated several Palestinians.

On Tuesday evening, clashes took place near Beit El Israeli colony and security center, built on Palestinian lands in the Ramallah and al-Biereh District of the West Bank, after the soldiers assaulted dozens of Palestinians, holding a solidarity protest with detained journalist Mohammad al-Qeeq.

The army assaulted the protesters and fired several rubber-coated steel bullets, and dozens of gas bombs.

Despite the serious deterioration in his health condition, the detained journalist continues the hunger strike he started 85 days ago, demanding Israel to end his arbitrary Administrative Detention, without charges or trial.

Al-Qeeq was taken prisoner on 21 November, 2015, when Israeli soldiers blew up the front door of his house and took him in for interrogation at Israel’s Kishon (Jalame) detention center.

His hunger-strike, that was started on 24 November 2015, came as a protest against administrative detention in Israeli prisons for six months without any charges or court.