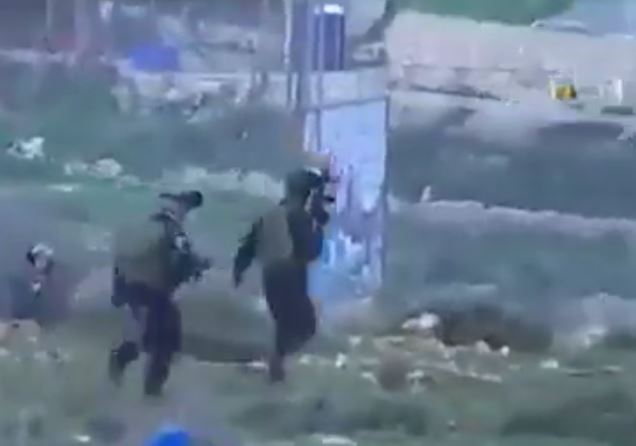 Israeli soldiers invaded, on Friday afternoon, the al-Jalazoun refugee camp, and Kharbatha al-Misbah village, in the central West Bank district of Ramallah, clashed with local youths, and fired live rounds, rubber-coated metal bullets, and gas bombs. Two Palestinian children were injured, and one was kidnapped.The clashes in al-Jalazoun initially started near Beit El colony, before extending into the main road of the refugee camp.

The soldiers fired several live rounds, rubber-coated steel bullets and gas bombs, causing dozens of residents to suffer the effects of tear gas inhalation, especially after the army fired gas bombs at a few homes in the area of clashes.

Local youngsters hurled stones and empty bottles on the invading vehicles, while many jeeps were trapped in the refugee camp before a few youths threw Molotov cocktails on them.

Medical sources the soldiers shot two Palestinian children with live rounds, and kidnapped one resident, at the main entrance of the refugee camp.

The army also used a surveillance drone to document the clashes, and take pictures of the protesters.

It is worth mentioning that the soldiers continued their occupation, for the fifth consecutive day, of two homes in the village, in addition to ongoing invasions into various neighborhoods and homes, and repeated inspection of ID cards.

Locals complained that the soldiers frequently fire concussion grenades during late-night hours, as an act collective punishment meant to deprive them from sleeping peacefully.