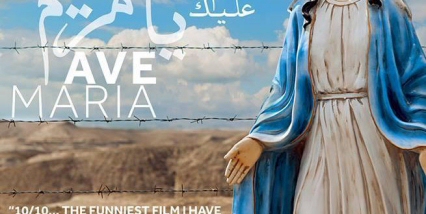 Basil Khalil, a Palestinian-British filmmaker born to a Palestinian father and English mother, in Nazareth, cannot contain his enthusiasm about his first professional filmshort comedy being nominated for the 88th annual Oscar awards.The British-Palestinian is the director of short film ‘Ave Maria.’ In an interview with Reuters Arabic, Khalil considered the production’s participation in the Live-Action Short Films section of the 2016 Oscar already a success.

“Words cannot express our excitement. Furthermore, this year we have two Arab films nominated (the other being Jordan’s best foreign film nominee Theeb). Now because of this nomination, more people are wanting to see the film, this enables us to share our stories with the wider public, and not just cinephiles.”

According to the PNN, Khalil started writing the story that would become ‘Ave Maria’ in a London café in 2011.

After struggling with financial resources, the short movie was finally filmed in Haifa and in a deserted convent close to Jericho, in the occupied West Bank.

The filming lasted for three days, while the editing, sound mixing, and film score took two months to complete.

The 14-minute comedy short tells the story of Palestinian nuns living in the middle of the West Bank and who have their daily routine of silence and prayer disrupted when a family of Israeli settlers’ car breaks down outside their convent at the beginning of the Sabbath.

The family needs to get home but cannot operate the phone, while the nuns have taken a vow of silence.

“I wanted to make a comedy, and to say something about normal human beings and awkwardness, and about a culture clash –without political slogans being thrown around everywhere. Politics and slogans one can get for free on the nightly news,” Khalil said, speaking with the Israeli news outlet Haaretz.

Some critics at a recent Egyptian film festival claimed that ‘Ave Maria’ is “a hint of the possibility for cooperation between Israelis and Palestinians?”

“This is definitely not a pro-Israel film and I wish I had been at that festival in Egypt to make that clear,” charges Khalil. “I would have set them straight. This is not a movie about cooperation. One can’t have real cooperation between occupiers and occupied. There is no level ground there.”

For Khalil, in terms of his identity, he refers to himself as British and Palestinian.

It premiered at Cannes Festival and was screened before at 60 festivals worldwide, including ones in Tunis, Qatar, Oman and Jordan. So far, ‘Ave Maria’ has won 11 awards.

At the Oscars, the short comedy is competing along with Everything Will Be Okay (Austria), Shok (Kosovo), Stutterer (Ireland), and Day One (or Alles Wird Gut-U.S.)

The 2016 Oscars winners will be announced during the 88th Academy Awards ceremony, which will take place in Los Angeles, California, tomorrow, February 28.

Also of interest: Interview with Shimon Dotan, Director of ‘The Settlers’