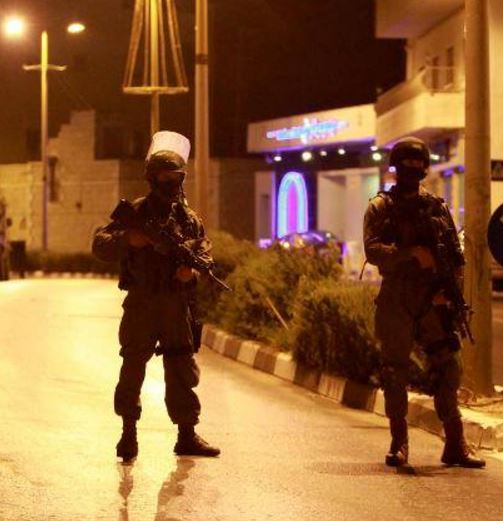 Israeli soldiers have kidnapped, Monday, at least twelve Palestinians, from their homes, in different parts of the occupied West Bank, including in al-‘Isawiyya town, in Jerusalem. One of the kidnapped is the father of Palestinian, who was killed by the army earlier.The Wadi Hilweh Information Center in Silwan (Silwanic) in occupied Jerusalem, said the soldiers invaded and searched homes in the town, and kidnapped two Palestinians identified as Mohammad ‘Oleyyan and Yousef ‘Oleyyan, before moving them to an interrogation center.

The soldiers also interrogated the families of the two Kidnapped Palestinians and several other residents during the invasion.

The soldiers also invaded the home of Fuad al-Juneidi, the father of Amir, who was killed by Israeli army earlier in Hebron city allegedly after attacking and wounding Israeli soldiers and kidnapped him.

The soldiers interrogated the Juneidi family in their home, in Sha’aba neighborhood, and violently searched the property.

Resident Qassem Jaber, 31, a former political prisoner who was imprisoned by Israel for seven years, was killed in the same incident, while Yousef Waleed Tarayra, 18, was killed after the soldiers claimed he tried to ram them with his car.

In Bethlehem, the soldiers invaded the Deheishe refugee camp, south of the city, and kidnapped two Palestinians, identified as Yazan Mohammad al-J’eidi, 20, and Mohammad Samir Abu Hitta, 17, after searching their homes.

The invasion led to clashes between the soldiers and local youths, who hurled stones and empty bottles while the army fired gas bombs and concussion grenades.

The army also summoned Jamil Khaled Ziyada, 20, for interrogation in the Etzion military base, south of Bethlehem.

In addition, several military vehicles invaded the Jenin refugee camp, in the northern West Bank city of Jenin, before the soldiers stormed and searched many homes, and kidnapped Fadi Hweil and Yazan Sa’adi, both in their twenties.

The army also invaded Nablus city, in the northern part of the occupied West Bank, before the soldiers broke into a residential building, used by students of the Najah National University, and interrogated many students while searching the apartments.