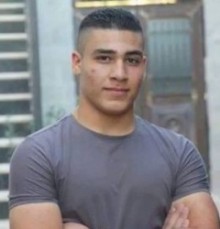 Israeli soldiers shot and killed, on Saturday morning, a Palestinian teenager in the southern area of Hebron’s Old City, in the southern part of the occupied West Bank, after he allegedly

attempted to stab a soldier.

Medical sources in Hebron said the soldiers fired several rounds of live ammunition on Abdullah Mohammad al-Ajlouni, 18, fatally wounding him in the upper parts of his body.

The incident took place near the Abu ar-Reesh military roadblock, close to the Ibrahimi Mosque, in the Old City of Hebron.

An Israeli ambulance later moved the young man to the Hadassah Medical Center, in occupied Jerusalem.

Eyewitnesses said the soldiers closed all the entrances of the Ibrahimi Mosque and prevented the Palestinians from entering it, in addition to closing all roads leading to the area where the deadly shooting took place.

Hours after al-‘Ajlouni’s death, the Israeli army allowed the transfer of his body to the Palestinian side, before he was taken to his family home, and later to the Tareq Bin Ziad Mosque, in Hebron, where the locals held his funeral.

Despite extensive military restrictions and deployment, hundreds marched in his funeral procession, carrying Palestinian flags, pictures of al-‘Ajlouni and dozens of Palestinians, recently killed by the army in Hebron, while chanting against the occupation and its escalating violations.

On Saturday afternoon, hundreds of Palestinians also held the funeral ceremony and procession of Mahmoud Mohammad Abu Fannouna, 21, who was shot and killed by Israeli army fire, at the Gush Etzion junction, near Hebron.

In related news, several military vehicles invaded Teqoua’ town, east of the West Bank city of Bethlehem, and clashed with many local youths.

Medical sources said one man, in his forties, was shot with a live round in his thigh, and was moved to a local clinic suffered a moderate injury.

Medics said he was shot with a Toto round, a hollow bullet that detonates upon impact, internationally prohibited for use against civilians.