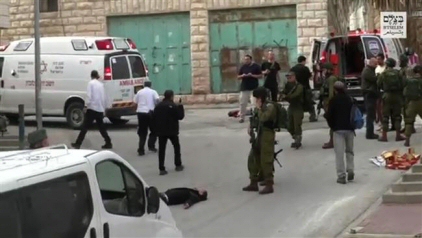 On Thursday, a video of a soldier executing an injured Palestinian in Hebron went viral. The Israeli army claimed, according to the PNN, that the soldier was suspended, and an investigation was opened into the case. The video by Emad Abu Shamsiyya, who works for B’Tselem rights group showed the soldier, surrounded by others, approaching the Palestinian man, identified as Abdul-Fattah Yosri Sharif, 21, as he lay wounded on the ground.

One of the settlers said to the soldiers: “This asshole, here, is still breathing.”

According to Tikkun Olam blog, a soldier who was a medic in the unit, and who had treated the wounded soldier, asked permission from his commanding officer to “finish off” the wounded Palestinian. Apparently the commander approved. The soldier walked to within six feet of the wounded Palestinian cocked his rifle and shot him. This practice is often called ‘confirming the kill’ in the IDF. Palestinian girls as young as 12 years-old have been executed in this fashion before.

The execution sparked anger amongst people all over the world, as more videos of the execution began to emerge on social media. Although it is widely known that Palestinians are often executed by Israeli security forces, but few in as blatant a situation as this, in broad daylight and on camera.

The Tikkun Olam website said that, upon wide research, the soldier was identified as El-Or Azaria, a resident of Ramleh, near Tel Aviv.

Other activists in Israel have helped in further identifying him, finding Facebook accounts and photographs which document him before the execution. He is a devoted follower of the Beitar Jerusalem soccer club. The most hardcore racist Beitar fans have formed a gangland-style fan club called La Familia.

The killers of 16-year old Mohammad Abu Khdeir, who forced him to swallow gasoline and then burned him alive, were also associated with that football team.

Among the pages the soldier has ‘liked’, on Facebook, are the far-right Kahanist, Baruch Marzel; racist rapper, ‘The Shadow’, who advocated burning Palestinians alive on his Facebook page; the La Familia page; Justice Minister Ayelet Shaked; and Avigdor Lieberman.

In many similar cases in the past, the army claims to investigate the incidents, then find insufficient evidence to prosecute, and close the case. This has led a number of Palestinian analysts and commentators to conclude that it is highly unlikely that justice will be done, with regard to this incident.