Army Demolishes A Commercial Building, And A Home, In Jerusalem 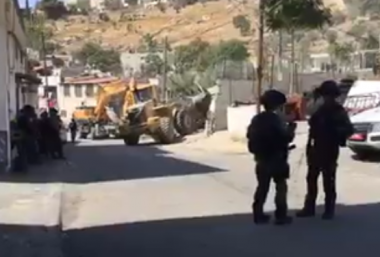 The WAFA Palestinian News & Info Agency said dozens of soldiers invaded the Sal’a neighborhood, between Jabal al-Mokabber and Silwan town, south of the Al-Aqsa Mosque, and demolished a commercial structure.

It added that the demolished building was owned by Na’im Abu Dweih, and that the army alleged it was built without a construction permit.

The soldiers also invaded the al-Bustan neighborhood, in Silwan town, and demolished a home, owned by Hamed Abu Sneina.

Abu Sneina was approached by various media agencies, and said he won’t make any statements, before his home is rebuilt.

Earlier on Tuesday, the soldiers demolished a two-story building, used for residence and commercial purposes, in the al-‘Isawiyya, in occupied East Jerusalem.