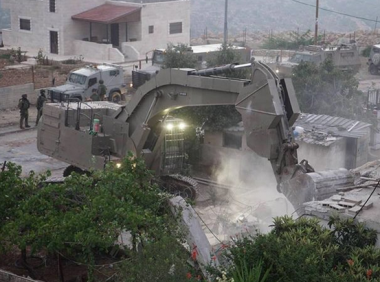 Israeli soldiers invaded, on Wednesday at dawn, the village of Kobar, northwest of the central West Bank city of Ramallah, and demolished a home belonging to the family of a Palestinian who stabbed, last month, three Israelis to death, in their home at a nearby colony. The soldiers also injured 26 Palestinians during ensuing clashes.

Medical sources in Ramallah said the soldiers shot 26 Palestinians during the clashes; one of them is a cameraman, identified as Mohammad Radi, who works for Palestine TV.

The cameraman was shot with a rubber-coated steel bullet in his face, after a soldier shot him from a close range, while he was filming the clashes.

The sources stated that thirteen Palestinians were shot with rubber-coated steel bullets, and thirteen others suffered the effects of teargas inhalation.

It is worth mentioning that the soldiers have recently abducted the parents, and uncle, of Omar al-‘Abed who carried out the stabbing attack last month.

The three slain Israelis have been identified as Yosef Salomon, 70, his daughter Chaya, 46, and his son Elad, 36.