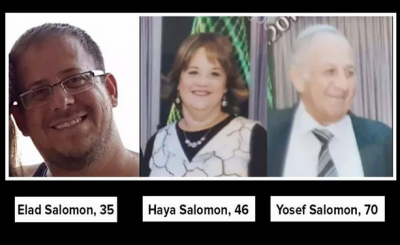 On Saturday evening, Israeli sources identified the three Israelis slain Friday as Yosef Salomon, 70, his daughter Chaya, 46, and his son Elad, 36. Yosef’s wife, and the mother of Chaya and Elad, is still receiving treatment at Shaare Zedek Medical Center, in Jerusalem.

Israeli daily Haaretz has reported that the attacker was a Palestinian identified as Omar al-‘Abed, who stabbed the family in their home in Halamish Israeli colony, before he was shot by a neighbor, hospitalized and later handed to the Israeli military for interrogation.

Haaretz added that the family was celebrating the birth of a grandson when the attack took place in their home, located on the edge on the settlement.

“He came on foot and reached the Salomon family’s home after jumping over the settlement’s fence. A neighbor, an off-duty soldier, who heard shouting, rushed to the Salomon family home and shot him,” Haaretz added.

Although the Israeli military and security devices believe the Palestinian identifies with Hamas, they do not believe he was an active member with the movement and acted alone, carrying out an attack that was motivated by the rising tension in Al-Aqsa Mosque, in occupied Jerusalem.

On Friday evening, three Israelis were allegedly stabbed to death, and another wounded, by a Palestinian assailant in the Halamish settlement in the West Bank.

Israeli sources said the Palestinian killed a father, 70, along with his son and daughter, in their thirties, and seriously  injured  the father’s wife, 68. There names have not been release yet.

Israeli medics rushed the family to Shaare Zedek medical center, in Jerusalem, but were only able to save the mother.

According to Israeli Ynet News said the attack took place as 10 members of the family sat for a Shabbat dinner, and that the wife of the son called the police after taking her children to a separate room.

Jerusalem Online reported that a medic told them, “When we entered the home, we saw four injured people lying [on the floor] with stab wounds. Three of them were unconscious.”

Channel Two News reported that the assailant was a Palestinian, Omar al-Abed, 20, from the village of Kobar, near Ramallah in the central West Bank.

He was was shot and injured before the Israeli soldiers transferred to Rabin Medical Center in Petah Titivate.

The Israeli channel also said that al-Abed left an online statement that he felt obligated to take action after the recent attacks by Israeli forces against Palestinians and the al-Aqsa mosque, but IMEMC has not verified that statement.

The incident took place hours after three Palestinians were killed by Israeli fire in occupied Jerusalem.