A New Generation Learns to ‘Shoot’ the Occupation 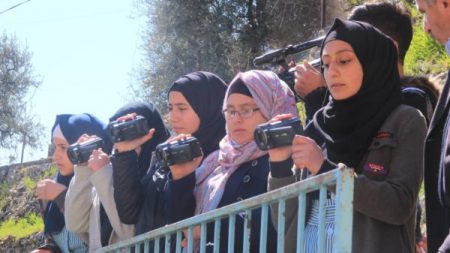 Human Rights Defenders have started a new project to protect the human rights of the children who have to live and study in the middle of the occupation and ghettoisation which is the centre of Hebron.

Last Sunday, 5th March, the first of four schools, Qurtuba School, had training in how to use video cameras as a tool to resist the attacks and harassment they regularly face from settlers and Israeli forces. Three other schools will also receive training. 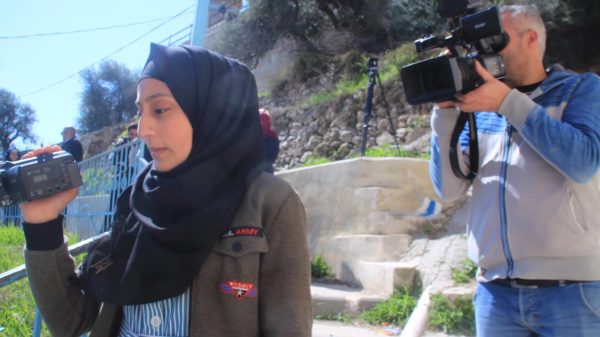 The next generation of activists (photo courtesy of Human Rights Defenders)

As Badia Dwaik, from Human Rights Defenders says: ‘The camera is our gun. We use it to shoot the occupation. We need to use the energy of the kids in the right way.  To be a good resistance, you should be alive: you should keep safe, and resist for a long time. We don’t want to be killed. To be alive and keep resisting is the most important thing.’

Human Rights Defenders have a history of using cameras to fight for human rights in Hebron. When Badia’s house was violently raided by Israeli forces in November 2015, Badia filmed the raid until soldiers broke his camera.  When the International Solidarity Movement (ISM) support group in Northern California heard of this they funded a further four cameras. One of these was used by Imad Abu Shamsiya to shoot the now internationally famous video [link  of the Israeli soldier Elor Azaria extra-judicially executing a Palestinian outside his house in Hebron in March 2016. Without Imad’s film there would have been no evidence and no international outcry.

Now, ISM Northern California have funded more cameras as resistance tools to continue to fight against human rights violations in the city of Hebron.

More in Human Interest: 03/02/17 What Does the Nakba Mean to Young Palestinians in Israel?