Opinion: Abbas‚Äô La-La Land And The Evolution Of The American Love Affair With Israel 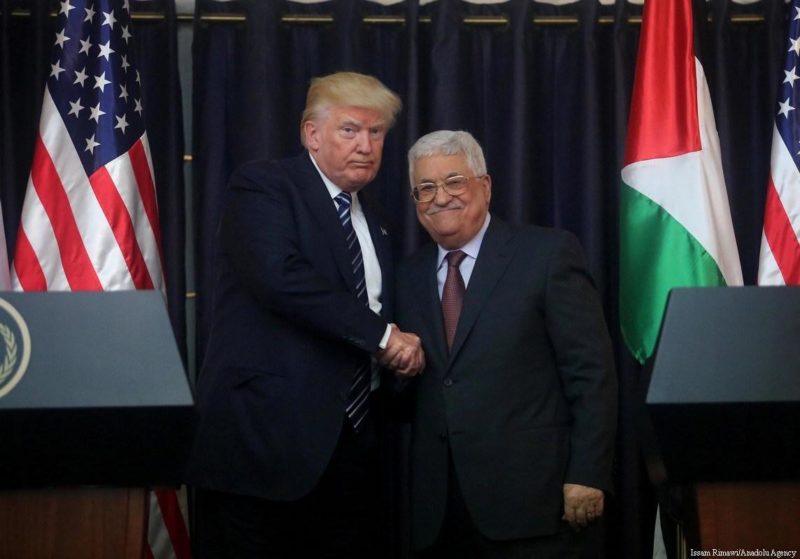 Palestinian Authority President Mahmoud Abbas is ready to ‚Äúgo to the White House and continue what [he] started with [US President] Donald Trump.‚Äù With this and other confusing statements, Abbas¬Ýtried to articulate¬Ýthe new Palestinian political agenda to foreign reporters in Ramallah last month.

According to Abbas, the PA is ready to return to negotiations with Israel if two conditions are met: Washington is to reverse its stance on East Jerusalem, thus recognising it as an occupied Palestinian city; and there is a renewed commitment to the so-called two-state solution. ‚ÄúI will not accept a one-state solution because one state will be an apartheid state,‚Äù Abbas insisted.

Aside from the Palestinian leader‚Äôs insubstantial logic, the official Palestinian discourse emanating from Ramallah these days seems oblivious to the massively changing political reality in Washington over the past two years or so. Remarks by Abbas, his¬Ýrecently-appointed¬ÝPrime Minister Mohammed Shtayyeh or other PA officials are apparently based on the logic of a bygone era, one in which the US claimed, however falsely, to be an honest broker for peace; a period that lasted for nearly 25 years and during which PA officials benefited from the massive ‚Äúpeace process‚Äù racket, bankrolled by the US and other countries.

However, the jig is up. The PA has ceased to serve any useful purpose for the Israelis and their American benefactors, apart from the continued and shameful ‚Äúsecurity coordination‚Äù aimed largely at suppressing any Palestinian resistance to Israel‚Äôs brutal occupation.

Everyone seems to acknowledge this seismic change, except the PA. While failing to understand the nature of the new challenge and redeem its past mistakes, the PA insists on remaining a major stumbling block to a new Palestinian strategy, one that should counter relentless US-Israeli efforts aimed at circumventing international law and, as a result, dismissing all Palestinian rights entirely.

Listening to PA officials speak makes one wonder if they are truly aware that the language coming out of Washington has shifted unmistakably, not only in its degree of bias towards Israel, but also in its complete adoption of the Israeli narrative in terms of nuances, religious fervour and political priorities. US officials now speak as one with members of Israeli Prime Minister Benjamin Netanyahu‚Äôs right-wing extremist coalition. The following examples illustrate the new US rhetoric that requires a complete Palestinian departure from their tired and clich√©d language of the past.

On 6 December, 2017, Donald Trump said in a White House¬Ýstatement: ‚ÄúJerusalem is not just the heart of three great religions, but it is now also the heart of one of the most successful democracies in the world. Over the past seven decades, the Israeli people have built a country where Jews, Muslims, and Christians, and people of all faiths are free to live and worship according to their conscience and according to their beliefs. But today, we finally acknowledge the obvious: that Jerusalem is Israel‚Äôs capital. This is nothing more, or less, than a recognition of reality. It is also the right thing to do.‚Äù

Trump‚Äôs infatuation with Israel is paralleled by complete disrespect and disregard for Palestinians. On 2 January 2018, he¬Ýtweeted: ‚ÄúWe pay the Palestinians HUNDRED OF MILLIONS OF DOLLARS a year and get no appreciation or respect. They don‚Äôt even want to negotiate a long overdue peace treaty with Israel. We have taken Jerusalem, the toughest part of the negotiation, off the table, but Israel, for that, would have had to pay more. But with the Palestinians no longer willing to talk peace, why should we make any of these massive future payments to them?‚Äù

US Vice President Mike Pence concurs. On 15 May last year, Pence¬Ýsaid¬Ýin celebration of Israel‚Äôs independence that Trump had done more to bring the US and Israel ‚Äúcloser together in a year than any president in the past 70 years.‚Äù He referred to him as ‚Äúthe greatest defender the Jewish state has ever had.‚Äù According to Pence, ‚ÄúPresident Trump made history now.‚Äù

For her part, former US Ambassador to the United Nations Nikki Haley played a major role in trying to marginalise Palestinians on the international stage. On 6 October last year she¬Ýinsisted¬Ýthat, ‚ÄúThe Palestinians are not a UN Member State or any state at all. The United States will continually point that out in our remarks at UN events led by the Palestinians.‚Äù

US Ambassador to Israel David Friedman, meanwhile, has the perfect blend of Pence‚Äôs religious fanaticism and Haley‚Äôs political opportunism. In an interview with the¬ÝNew York Times¬Ýpublished¬Ýon 8 June, he said that, ‚ÄúUnder certain circumstances, I think Israel has the right to retain some, but unlikely all, of the West Bank.‚Äù

Friedman‚Äôs open support for Israeli colonialism was matched by¬Ýcomments¬Ýmade by US Middle East ‚Äúpeace‚Äù envoy Jason Greenblatt two weeks later: ‚ÄúWe might get there [to a peace deal] if people stop pretending settlements, or what I prefer to call ‚Äòneighbourhoods and cities‚Äô, are the reason for the lack of peace.‚Äù He brushed aside the fact that all of Israel‚Äôs colonial-settlements are illegal under international law since they have been built on Palestinian land under Israeli military occupation since 1967.

When the PA dared to protest against such political bullying, Trump‚Äôs son-in-law and top adviser Jared Kushner¬Ýlashed out¬Ýon 3 July at the ‚Äúhysterical and erratic‚Äù Palestinian leadership. ‚ÄúThe door is always open for the Palestinian leadership‚Ä¶ If they stop saying crazy things,‚Äù he added.

According to the new American political lexicon, Palestinians have absolutely no rights; international law has no relevance; and supposedly democratic Israel is a model state incapable of erring. In Washington‚Äôs la-la land, there can be no room or tolerance for discussions about military occupation, illegal settlements, genocidal wars, sieges and apartheid if they involve even the slightest criticism of Israel.

Considering America‚Äôs complete and unconditional adoption of the Israeli agenda, Abbas should stop talking about negotiations and conditions. Instead, he should revitalise and unite the Palestinian front to counter the US-Israeli menace and its political lackeys across the Middle East.

Ramzy Baroud has been writing about the Middle East for over 20 years. He is an internationally-syndicated columnist, a media consultant, an author of several books the last of which is ‚ÄúMy Father Was a Freedom Fighter: Gaza‚Äôs Untold Story.‚Äù

« ISM Water Series: ‚ÄòThere‚Äôs no law in the world that says you can cut water from humans.‚Äô The Political Marginalization of Palestinian Women in the West Bank »