Adnan Sentenced to One Year 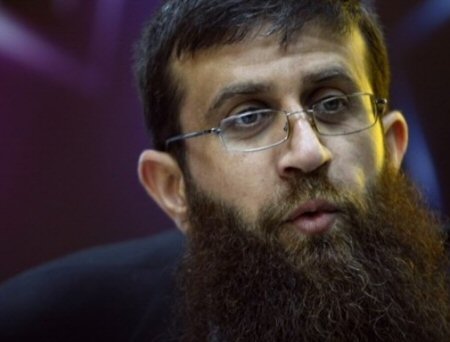 The Israeli military court in Salem, north of the northern occupied West Bank district of Jenin, sentenced Palestinian detainee Khader Adnan to one year in prison, fined him 1,000 shekels ($270) and 18 months suspended sentence for five years, on Monday.

Jawad Boulous, head of the legal department in the Palestinian Prisoner’s Society (PPS), said that the prison sentence starts from the day of his arrest on December 11th, 2017.

Adnan, 40, a father of seven children, has been on an open hunger strike for 58 days and even stopped drinking water, as a form of protest against his “arbitrary” detention by Israel.

Despite the sentence, it remained unclear whether Adnan suspended his open hunger strike or not, according to Ma’an.

Since Adnan began his hunger strike, Israeli authorities have imposed harsh measures, such as isolation, no visitations, and being transferred from one detention center to another.

Israeli forces had detained Adnan on December 11th, 2017, accusing him of incitement.