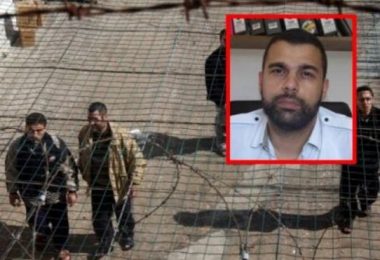 Abdul-Nasser Ferwana, the head of the Studies and Documentation Unit of the Palestinian Detainees Committee, has reported that the Israeli authorities issued an arbitrary Administrative Detention order against a Palestinian detainee after he served a 14-year prison sentence, and was supposed to be released.

Ferwana stated that the detainee, Bilal Kayed, is now illegally held under Administrative Detention orders, without charges or trial, although he already served the 14-year term that was imposed on him.

“He already served the 14.5-year term, and instead of letting him go home, Israel decided to keep him held under Administrative Detention,” Ferwana stated, “This decision is illegal, unjust and immoral.”

The Palestinian official stated that the decision violates the basic principles of International law, constitutes a crime against humanity, and is only meant to blackmail and abuse the detainees.

“This is a crime, a blatant violation of International Law – all related international organizations and human rights groups must intervene, and end the illegal Israeli policies,” Ferwana added, “Administrative Detention is an illegal measure imposed by an authority in order to hold the detainees captive, without filing any charges against them, without trial – and is frequently illegally renewed.”

Ferwana also stated that Israel turned its illegal Administrative Detention orders into a steady policy, a continuous act of collective punishment against the detainees, and their families.

“It became an easy alternative to trials and court sessions, allowing Israel to hold the detainees captive without trial,” he added, “Since 1967, Israel held dozens of thousands of Palestinians captive without charges – right now, there are more than 750 detainees under Administrative detention orders.”

There are at least 7000 Palestinians who are held captive by Israel; among them are around 70 women, and more than 400 children, all held in 22 prisons, detention and interrogation centers.

Kayed is from Aseera ash-Shemaleyya town, near the northern West Bank city of Nablus, and was taken prisoner in 2001 for membership with the Abu Ali Mustafa Brigades, the armed wing of the leftists Popular Front for the Liberation of Palestine (PFLP).

He was repeatedly transferred between many prisons and detention centers, and was frequently held in solitary confinement, including when he remained in solitary for more than twelve consecutive months.