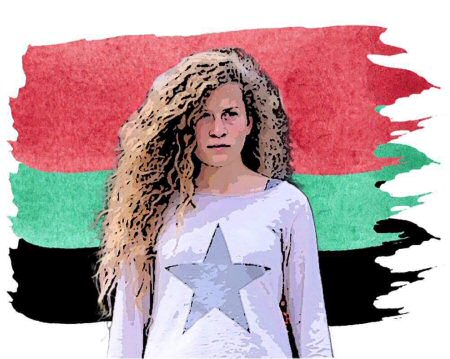 On May 11, 2019, commemorating the 71st anniversary of the Palestinian Nakba or “catastrophe”, hundreds of protesters marched through the streets of London in solidarity with the Palestinian people, Maan News reports.

During 1948, the Palestinian Nakba, an estimated 750,000 Palestinians were forcibly expelled from their homes when the state of Israel was created on the ruins of hundreds of Palestinian villages and towns.

The march, organized by the Palestine Solidarity Campaign (PSC), and led by Palestinian icon Ahed Tamimi, 17.

Tamimi was released in July 2018, after serving 8 months in Israeli prison for slapping an Israeli soldier in response to her cousin Muhammad, 15, who was shot in the head, with a rubber-coated steel bullet, by an Israeli soldier.

Speakers called for justice for the Palestinian people and an end to the 12-year Israeli siege on Gaza, and denounced Israel’s most recent attacks on the Gaza Strip, which killed 27 Palestinians, including an infant, a toddler, and two pregnant women.

Some of the slogans heard were; “Free Palestine”, “End Siege on Gaza”, “Exist! Resist! Return!” and “Freedom to Palestine.” Some of the protesters were filmed referring to the 1917 Balfour Declaration, stating; “It was Britain that was supposed to protect the rights of an entire people! But it failed.”

The head of the British opposition Labor Party, Jeremy Corbyn, showed support via his official Twitter account, stating “We cannot stand by or stay silent at the continuing denial of rights and justice to the Palestinian people.”