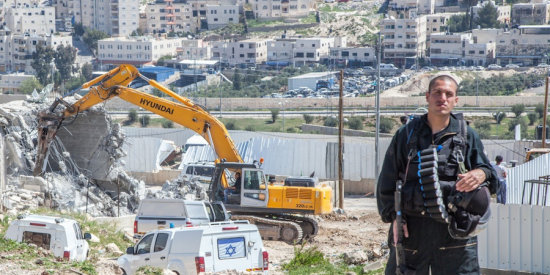 “Struggling against Israel as a fascist or apartheid state must be a part of an anti-colonial struggle that Jews themselves participate in.” ~ 08/07/16 Michael Warschawski, Alternative Information Center (AIC), Beit Sahour

My friend and comrade Eli Aminov sent me a text that he wrote titled Fascism or Apartheid. In his piece, he argues with an article recently published in Haaretz and written by Professor Zeev Sternhell, a leading expert on European fascism. Sternhell’s article warns of fascism in Israel and convincingly demonstrates local developments reminiscent of Germany in the 1930s. In response, Aminov argues that the term “apartheid” is key to understanding contemporary Israeli society.

If we use the term “fascism” in its broadest sense rather than its classical definition – which assumes that a strong working class threatens the capitalist system and consequently must be destroyed – then Sternhell, Avrum Burg and others who use the term are right: in the past decade the radical right wing regime has employed violent means to thwart all opposition. Such means include passing anti-democratic laws, employing tactics of delegitimisation, consolidating institutional authorities portending to protect the regime as a “Jewish and democratic state,” and constructing the media as a hostile entity. The unrestrained attack on Palestinian citizens, their leaders, and institutions, however, must be added to this list.

Though Aminov accepts that the current Israeli government uses oppressive tactics, he argues that Strenhell’s use of the term “fascism” legitimizes the old regime and the oxymoron of a “Jewish and democratic state.” As such, he prefers to use the term “apartheid regime.”

To comment on Aminov’s insistence of “apartheid,” I will quote an article that I published some five years ago titledApartheid? Worse than Apartheid!:

‘Five, six, seven eight, Israel is an apartheid state!’ Like many other slogans we shout at demonstrations, this is not a scientific definition of a regime, just like the famous slogan of students, in May of 1968, ‘CRS=SS’ didn’t mean that [Charles De Gaulle]’s special forces were committing genocide, or even something approaching that. This is an expression of anger, and nothing more. Our South African friends from the [African National Congress] often warned us about use of the term apartheid outside of the South African context.

To conclude the article, I noted that if it’s best to leave the matter of defining terms to political science, we must focus instead on the apartheid crimes being committed by the Israeli authorities.

Apartheid is both a philosophy of separation (the literal meaning of the word in Dutch) and a regime based on dividing the population into groups with various degrees of civil, political, social and cultural rights. There is no need to elaborate on how these two aspects co-exist in the Israeli regime, both within the Green Line and in the West Bank: apartheid crimes are meticulously defined in the International Convention on the Suppression and Punishment of the Crime of Apartheid and Israel is systematically committing dozens of such crimes.

Defining the regime is important to understand its meta plan as well as the mechanisms it employs to attain its goals. It allows us to identify who in society has an immediate interest in the struggle – i.e. who are the direct victims of the regime or the people who pay the price for the implementation of its plans. Therefore, Aminov’s disagreement with his interlocutor is not just a disagreement over definitions of “fascism or apartheid,” but over our duties and the social forces that can and should be mobilized in the struggle against the regime.

Israel is a colonial state in every way – it’s regime, institutions, and laws. It was not only born of a colonial movement (Zionism), but primarily functions to this very day as a colonial entity without borders using its resources to establish an ethnic state, an exclusively Jewish state, and secure development for the benefit of a national group defined as the owners, the Jewish community.

In Aminov’s lengthy article, the Palestinian people and its liberation movement are not mentioned. The term “colonialism” is mentioned only twice: first, when Aminov quotes Sternhell in a 2014 interview with journalist Gidi Weitz, “[Israel] today is the last colonial state in the western world… without the fear of charges of anti-Semitism, settlements would have been boycotted long ago in Europe,” and second in his initial response to Sternhell’s statement, “indeed, every word is true… Sternhell was correct in his assertion that Israel is the last colonial state existing in the world due to munificence of the West.”

Let there be no mistake: I am casting no doubt whatsoever on the anti-colonialism (i.e. in the Israeli context, anti-Zionism) of Aminov. The disagreement with him pertains to the question of centrality of the Palestinian national movement.

When reading his article (and all of his articles), we meet “the masses,” – i.e. Jews and Arabs, who must be united in a struggle for secularism and democracy, or “a secular democratic state,” and whose difference in identity is, at most, the religion of their parents or grandparents. This, by the way, was the initial approach (with various nuances) of Fateh and most of the Arab left-wing groups until the end of the 1980s.

In contrast to Aminov’s approach, I maintain that the key players on the ground are not an apartheid state and the “masses” that must be united. Instead, the key players include a colonial state that continues to rely on the support of people who enjoy vast privileges over the indigenous population and the Palestinian national liberation movement that relies on the support of the Arab peoples (due to today’s absence of an organized Arab national movement).

From here, of course, we can derive some conclusions on the role of Israeli anti-colonial activists: on the one hand to support, as best they can, the national rights of the Palestinian people and their struggle for liberation (solidarity), and on the other to entrench divisions amongst the colonial population. This population is not homogenous block, but a society with classes, rich and poor, the exploited and exploiters.

Jewish-Arab unity is not a reality but a project that must be built with solidarity and through the accentuation of the internal contradictions that underpin the colonial Israeli society.

Translated by the Alternative Information Center.

Also from AIC: The Right Man in the Right Place